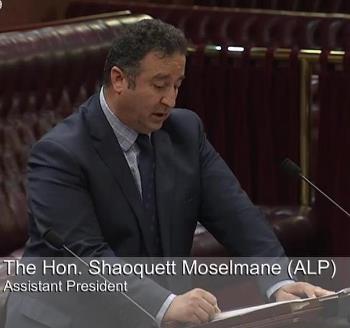 The Hon. SHAOQUETT MOSELMANE: The ongoing media deionisation of our Australian Chinese community must stop and it must stop now. It is indiscriminate, it is trashy and it is abhorrent. Who has any right to question the loyalties to Australia of any Australian, let alone 1.2 million Australians of Chinese heritage? The collective victimisation and depiction of Chinese Australians and anyone who associates with them as disloyal to Australia is shameful and must be condemned. In decades gone by we witnessed the terrible treatment and malign abuse many migrant Australians suffered as a result of rampant bigotry, much of it fuelled by trashy journalism. Muslim Australians, for example, suffered intense religious vilification as a result and it continues today.

With the election of President Donald Trump and the tensions around the United States‑China trade war, the Chinese community in Australia has experienced intense media victimisation. The level of attack rose higher as the debate around Federal foreign interference laws raged. Whilst such laws are not intended to target any particular country, there is no doubt that they have been used to target China. It seems that they see a tree but they fail, intentionally or otherwise, to see the forest of influence peddling by many others. This deliberately orchestrated China panic, heightened by "reds under the bed" public discourse, is destructive and allows for targeted collective punishment of all Chinese Australians.

This is wrong and it has brought on anti‑China hysteria that has given rise to so much hate, leaving many Chinese Australians living in fear. The last thing we want is to relapse into the era of the White Australia policy, allowing for a new wave of potential yellow peril fear mongering. I find it abhorrent that sections of the media can question Chinese Australians' loyalty to Australia. It is a despicable trial by media and I suspect there will be more of it following Prime Minister Morrison's visit to the United States next week. Ever since I entered this Parliament—almost 10 years now—a section of media has never ceased to vilify me.

Lately I was subjected to more grubby attacks because of my work and friendship with the Chinese Australian community. The journalists who sifted through my register of disclosure would have seen that in my trips to China I have, for instance, gone there to deliver wheelchairs for disabled children in China. Did they report that? No, they did not because they do not want to let the positive facts come in the way of a good trashy story. In fact, I was in China to deliver four containers of wheelchairs, two of which went to an orphanage in Shanghai. The official in the photo that the Daily Telegraph used to try to paint a sinister connection to the Communist Party of China is actually an official who received us and helped facilitate the distribution of the wheelchairs. This is the very definition of fake news. There is more to tell but time does not permit me. I take this opportunity to express my delight that I have now registered Kids-On-Wheels Alliance Incorporated, which is a charitable organisation that has received Australian Tax Office charitable status. Funds raised with the Chinese community through this charity will be used to manufacture wheelchairs in China to be distributed, first in China and then anywhere and everywhere I can deliver them.

I plan to travel to China to visit wheelchair manufacturers in the hope that I can produce the maximum number of wheelchairs at minimum cost for a maximum number of disabled children. I am proud of every one of the 1.2 million Australians of Chinese heritage. I admire their tenacity, their work ethic, their family and community values, their commitment to a fair and decent Australia and I greatly value and respect their friendship. The grubby attacks on my staffer, who is an Australian of Chinese heritage, is despicable. I thought better of the Sydney Morning Herald but this was yet another example of doormat journalism—you would not wipe your shoes with it. This paranoid hysteria, this China panic pedalling is injurious, it is hurtful, for which sections of our mainstream media should and must be held to account.