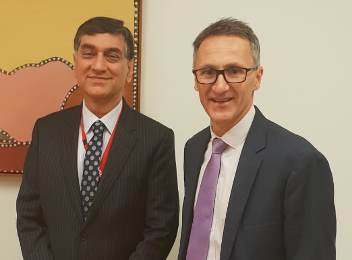 The High Commissioner Babar Amin appreciated the Greens for their consistent and unwavering support to the Right to Self-determination of Kashmiris. He especially admired the support rendered after the illegal abrogation of autonomy and removal of restriction on the demographic changes in the Indian Occupied Jammu and Kashmir (IOJ&K) by the Indian government, on 5th August 2019. The High Commissioner thanked the Greens for tabling Resolutions and making statements by its Senators and Representatives, including by Senator Di Natale himself, in the Federal and State Parliaments.

The High Commissioner Mr. Babar Amin briefed the Greens leader on the Reports of the office of the High Commissioner for Human Rights (OHCHR) issued in June 2018 and July 2019 about the grave human rights violations in IOJ&K. He also highlighted the Reports issued by the OHCHR and other Human Rights Organizations, Civil Society, Global Leaders and International Media, since 5th August this year.

The Hon. Senator Di Natale thanked the High Commissioner for outreaching to the Greens and to brief him on the situation in Jammu and Kashmir. Expressing deep concerns, he raised numerous queries to learn about the human rights and humanitarian plight of the people of IOJ&K. The Greens leader also inquired about the current situation in the backdrop of certain claims that ‘normalcy had return to the region’. The High Commissioner drew attention to the numerous recent reports by the Indian civil society highlighting that situation in IOJ&K was ‘far from being normal’.

The Hon. Senator Di Natale stated that it was Greens’ position to stand against human rights violations globally and assured to continue raising voice for the realization of the rights of the Kashmiris. 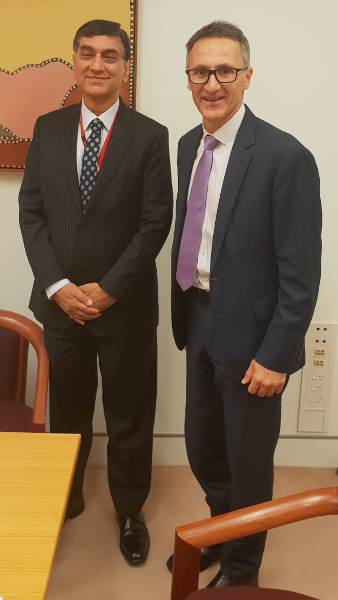