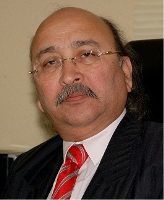 For Sada-e-Watan, A Congratulation Message from Leading Poet and Journalist Ashraf Shad

Syed Zafar Hussain is my longtime friend even before we both came to Australia. I know him from my Kuwait days when he was representing Nawa-i- Waqt, the leading Pakistani daily and I was editing the Urdu pages of Arab Times, the Kuwaiti daily. Zafar Hussain was a source of strength for me as I was new in Kuwait and he helped me to understand the dynamics of Kuwaiti media and was always there whenever I needed his support.

Zafar Hussain brought to Australia his journalistic experience and his personal charm and tirelessly worked to establish community newspaper, first in print and then on the net. I tried to discourage him when he started his first newspaper in 1993, but he was determined and I envy him for his consistent efforts and fighting spirit against all odds.

He launched the electronic version of Sada-e-Watan ten years ago and today it’s the most credible source of information for community events. He was very supportive of our literary programs when we were organizing international Mushairas in the past and also when we launched Urdu International Australia last year.

Dr Yasmeen Shad and I would like to wish Zafar and Nafisa all the best on the 10th anniversary of Sada-e-Watan and hope the voice will become louder and louder.