In 2003, the Chairman of Al Zahra College, Ahmad Mokachar, invited all local Principals to visit his school in an attempt to develop positive relationships between the schools in the area. Some of the Principals said, “No”, some said “I will think about it” and a few immediately replied, “Yes”. These Principals had already recognised the need to develop cultural and religious cohesion within their community and the need to work towards common values within the diverse communities of the State, Catholic and Independent sectors.

In June 2003, the first group of Principals met from these schools and so the Interschool Committee began. The main aim of the committee was to work towards improving cultural and religious understanding within a range of different faiths.

Principals met once a term to formulate ideas, discuss issues, re-connect and support each other. Each meeting was hosted by a different school, developing relationships and building on the values of respect and tolerance.

Early Stage 1 and Stage 1 groups formed in order to support curriculum development and to share resources. These meetings resulted in the establishment of networks between schools where teachers had the opportunity to engage in professional dialogue around Key Learning Areas. Each meeting had a mutually decided purpose linked to specific outcomes, with time made available during school hours for teachers to interact professionally.

While the Principals met, 2 student leaders from each school participated in activities related to shared values and the establishment of positive relationships. The leaders played games, debated, participated in art, creative writing and informal and formal conversations leading to friendships, trust and acceptance. It was through these initiatives that our common values and beliefs were promoted and recognised. Morris Iemma recently stated: “Schools are the engine room of multiculturalism and integration.” and what better way to demonstrate these words than through an initiative such as this.

In 2004 6-8 students from each school were selected to participate in writing and performing a play promoting harmony, tolerance and co-operation. The play was set in a mythical land at a mythical time. The characters were the inhabitants of three villages, represented by different coloured clothing – red, yellow and blue. After many years of war between the villages, the inhabitants finally decided to live together in peace. To mark the agreement, the adults decided to build a great tower in the land between all 3 villages. However, they could not agree on the shape and started to argue and insult each other and so the project was discarded.

The children, however, decided to work together and fix the problem, resulting in a Friendship Tower being built that incorporated all 3 colours and a combination of the shapes each village wanted. The play was purpose written with the theme of harmony and co-operation and was a great success.

The play was performed in front of a large audience of parents and community members from all 7 schools at the St George Bank Auditorium, Kogarah on 26th August 2004.

This performance was followed up by repeat performances at each participating school in order to access the whole school community. This was a great opportunity for us to promote our values throughout each school and into the wider community.

It was decided by the Committee to select 2 students from each school who showed talent in the areas of writing and art to participate in a book project with renowned children’s author Nadia Wheatley and illustrator Ken Searle.

This entailed a combined student effort to create a book focusing on the local Wolli Creek bushland in order:-

·         To develop Respect for the land where we all live and its traditional custodians. (The aboriginal word “Ngurra’ encompasses the respect for our land and what it means to each of us).

·         To experience joy in exploring and sharing this place together

·         To create a community as a group of individuals from diverse backgrounds, and

·         To develop harmony with each other and the environment.

The project was entitled “Going Bush”. The students’ writing and artwork was collated into a book published in 2007 by Allen and Unwin.

The experiences that these children have gained will stay with them forever, as will the friendships and trust that were developed over the period of the project between and within such culturally diverse communities.

For many of these students and their parents it was the first time that they had contact with the Islamic faith. However, the trust that had been already established over the years with each school community resulted in parents from the Catholic and State schools happily entrusting their children to the Al Zahra College each week knowing that they would be happy and safe and well cared for.

This mutual trust and respect was very evident at the launch of the “Going Bush” project at Al Zahra College on 21st December, 2005

In the plan to advocate core values and beliefs, it didn’t seem plausible that it could be taken world wide. However, due to the publication of the book by publishers Allen and Unwin, this will now be the case.

This project did not only impact on the students, but the parents established friendships while waiting for their children each week at Al Zahra College. Two parents in particular, one from Bexley Public School and one from Our Lady of Fatima Kingsgrove, decided to commemorate the project by painting a portrait of Nadia and Ken with some of the students involved. They also wrote a poem about their journey with their children as a way of expressing their feelings and emotions at the outcome of this project.

A further initiative to resource this project was a dinner function on the occasion of International Peace Day hosted by Al Zahra College  to raise much needed funds for the book project. A painting was donated to be auctioned at the dinner and together with the price of the dinner $25,000 was raised which was used to cover the expenses of the project and to fund future initiatives.

Guest speakers at this function were Rose-Marie Hoekstra who represented the Catholic Schools involved in the project, as well as the President of the Board of Studies and the Chief Executive Officer of the Association of Independent Schools.

The Principals saw the need to widen the scope and number of students that could interact and exchange knowledge and experiences. It was decided to use Harmony Day as a catalyst for bringing schools together on a larger scale. 30 students from each school walked or were bussed to Arncliffe Park on 21st March to have fun, make friends and demonstrate what “harmony” really looks like. The students, teachers and parents were delighted to spend several hours together in collegiality and friendship.

Each school nominated a colour and the children wore 8 ribbons each. During the course of the day, they had to connect and talk to students from the other schools and exchange ribbons until they were wearing 8 different coloured ribbons. Watching the children introduce themselves, interact while exchanging ribbons and then climbing onto a ride together was the highlight of the day.

As a result of the projects to date, the committee was asked to present its achievements at the following events:

In 2007, discussions took place about new possible activities that would involve students, teachers and principals in different, yet meaningful ways.

The committee came up with and worked on the following projects:-

- On the 21st March for Harmony Day the 7 schools held an Interschool Sports Day at Bexley Oval. Everyone celebrated the value of inclusiveness through the spirit of sport. It was a hugely successful day with some local politicians attending.

- In May, Dr John De Nobile ran a very successful 2 day workshop for the Stage 3 teachers on Values Education. The following is an indication of some of the work covered in the workshop:-

Kohlberg’s theory of moral development and its implications

Selman’s theory of social development and its implications

- In June, Dr John De Nobile ran another equally as successful 2 day workshop for the Stage 3 teachers on Values Education but this time parents and children were also included.

- A play was produced by talented drama students from the 7 schools led by a professional drama teacher. The performance “Threw (Through) Our Children” was

based on the Values for Australian Schooling and held at the Orion Centre in Campsie. The Master of Ceremony was Anne Colreavy from Our Lady of Fatima at Kingsgrove, the key speaker was Ahmad Mokachar from Al Zahra College who gave an overview about the 2007 project and a brief history of the inter school harmony committee and the closing comments were presented by Chris Johnson from Athlestane Public School.

The following is a brief outline of the play.

Respect…. The children played the aboriginal game Juluhya down the aisles.

Responsibility ….. All the children participated in Tai Chi movements to music.

Care and Compassion …… Slow motion running race where someone fell and the leader went back to help and thereby lost the race but won the trophy.

Doing Your Best…Three legged race where there was a dispute because one of each pair was intolerant of the other member.  Various combinations were tried until all 7 were tied together to run across the stage.

Fair Go … Tchoukball. Actors argued over what games to play as they had different abilities, heights, ages etc and decided on Tchoukball because it was fair and all could play.

Honesty and Trustworthiness ….Surf lifesaving.  Lifesavers were doing their training and Ironman games.  One person went to get lunch for everyone and had a large amount of money.  When they were called to rescue an audience member the money was left with a bystander.

Integrity …… Cricket.  A batter is called ‘in’ by the umpire but because he/she knew that he/she was ‘out’, the batter walked.  A pin-point red light represented the ball and when the batter hit a six the ‘ball’ was caught by a child who was in the audience.

Understanding, Tolerance and Inclusion …. Wheelchair Athletics, various games but the final games were ‘shot-put’ of lollies into the audience.

The script was written by the children and it demonstrated imagination, creativity, athletic flair and good humour.

Many guests were present at the function including the following:-

- Stage 3 teachers from each school worked together to develop and trial a unit of work on Values education with a multicultural perspective.

Principals are to continue to liaise and work together on a term basis throughout the year, including dinner meetings, celebrations of achievement and sharing of resources. 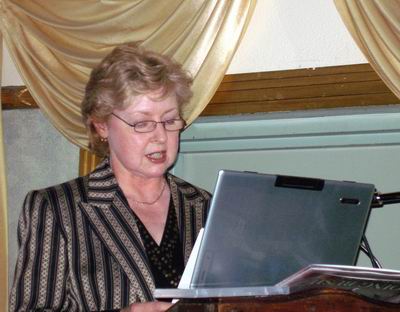 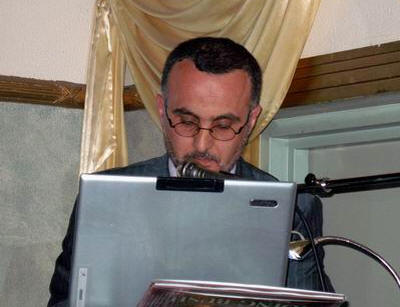 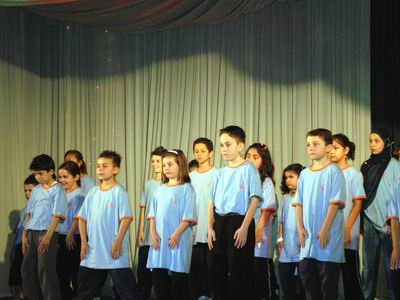 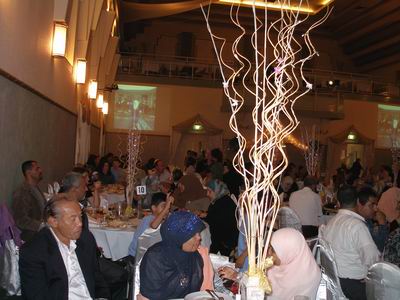 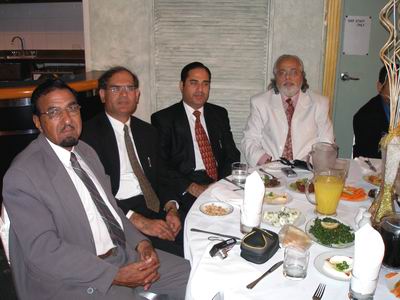 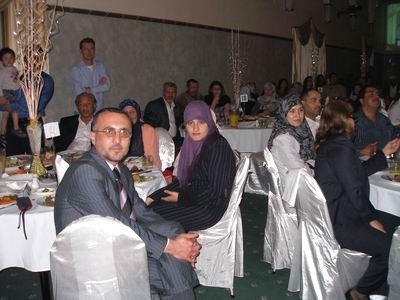 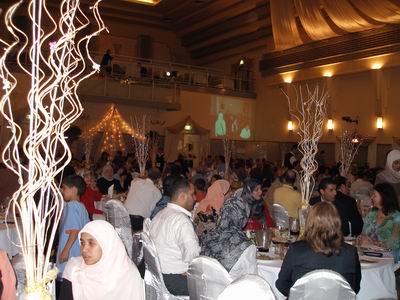 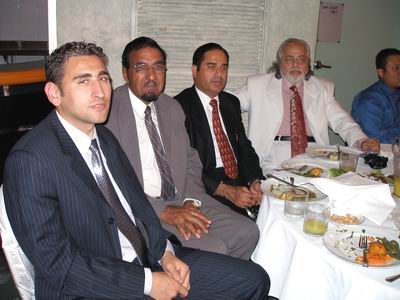 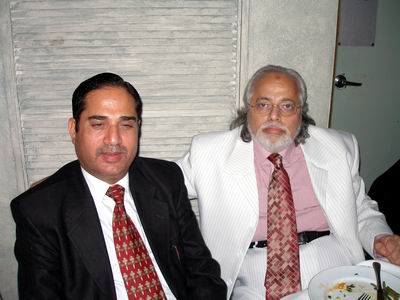 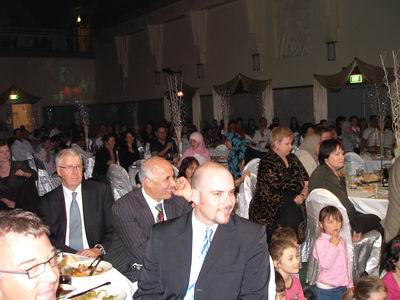 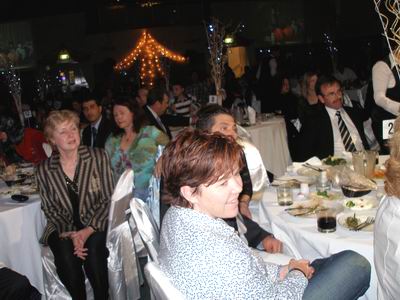 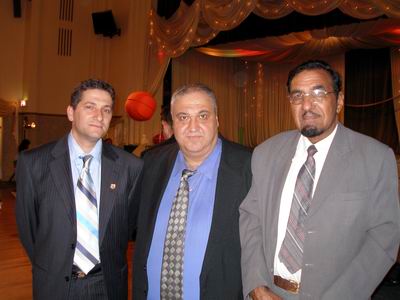 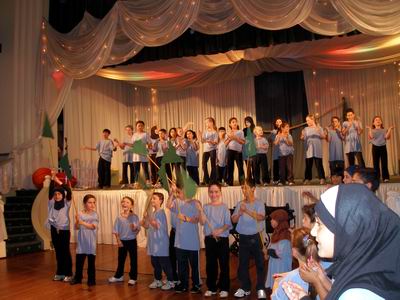 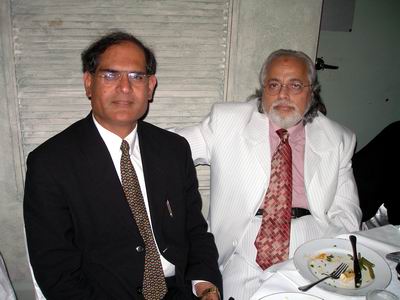 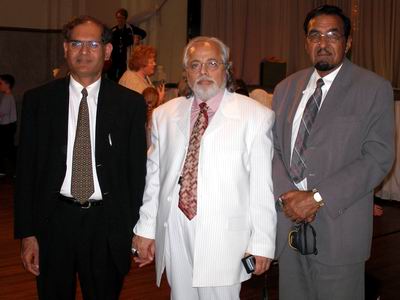 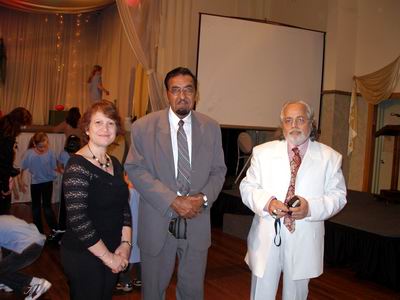 Email this page to a friend!