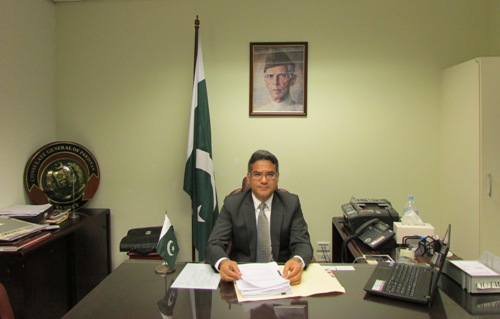 On the occasion of Australia Day, 26 January 2016, it gives me an immense pleasure and satisfaction to write about the growing bilateral trade relations between Pakistan and Australia, the two great nations of the Asia-Pacific Region.  Our trade ties with Australia started soon after the birth of Pakistan, when in 1948 a Trade Mission of Pakistan was established in Sydney. Since then the Trade Mission has remained functional in Sydney in one form or another to promote trade relations and to facilitate the businesses from both the countries.

In last five years, the volume of bilateral trade between Australia and Pakistan has ranged between Aussie $550 Million to $811 Million. A significantly positive trend in Pakistan’s exports to Australia was witnessed when these grew by 17.35%, rising from $179 Million (in FY2012-13) to $210 Million (in FY2013-14). In FY2014-15, our exports grew by another 14% and reached A$239 Million, while three years prior to FY2013-14, our exports had stagnated around $175 Million. So, in terms of our exports to Australia, we have moved on, from sluggishness to vibrancy, at least in last few years.

Australia and Pakistan have set up a Joint Trade Committee (JTC), which is an effective bilateral forum for trade discussions and negotiations between the two countries. JTC meetings are held annually, both in Australia and in Pakistan, on rotation basis. 5th JTC Meeting was held in Canberra in September 2014 in which issues of bilateral trade, trade policy, market access, technical support and enhanced bilateral exchange of trade delegations were discussed. Important decisions were taken, which included collaboration of Austrade and TDAP for trade promotion activities and provision of technical assistance by Australian government under the Country Assistance Programme (CAP) for strengthening the institutional capacity of Ministry of Commerce and trade related private sector organisations of Pakistan. Both sides agreed to continue technical cooperation in the areas of agriculture, engineering and vocational training. They decided to make use of various tools for market development including business-to-business meetings, awareness seminars and exchange of delegations. A Memorandum of Understanding (MoU) on Strengthening Bilateral Trade and Economic Cooperation was signed between Pakistan and Australia. The 6th JTC meeting between the two nations is likely to be held soon in Islamabad, which promises further improvements in the bilateral trade and economic relations between the two nations.

Promoting business-to-business contacts and exchange of Business Delegations on regular basis are very crucial in boosting trade relations among the nations. An increased activity has been witnessed in business interactions between Australia and Pakistan in last three years. In order to explore export opportunities and to establish their business networking in Australia, six business delegations from Pakistan visited this region, since July 2013. These included textile manufacturers and exporters from FCCI Faisalabad (Sept 2013); Towel Manufacturers Association (TMA) of Pakistan (Apr / May 2014) Karachi; two business delegations from LCCI (Oct 2014 & Mar 2015) Lahore; a TDAP sponsored national level business delegation (May 2015); and more recently a delegation of Women Entrepreneurs of Pakistan (Nov 2015). Several other Pakistani businesses are planning their business trips this year including delegations from FPCCI Karachi, SCCI Sialkot, RECP Karachi.

Participation in International Exhibitions and Trade Fairs is an important tool for flourishing the individual business at micro level and growing trade volume at macro level. In Oct 2013 and Feb 2015, two Australian Business Delegations visited Pakistan to participate in 8th and 9th Expo Pakistan in Karachi. Similarly, Pakistani manufacturers and exporters participated in Australian International Sourcing Fair (AISF) Melbourne in Oct 2013 and Nov 2014 and International Sourcing Expo of Australia (ISEA) in Nov 2015. Pakistani manufacturers and exporters of foodstuff and other related products also participated in Fine Foods Australia in Sept 2015. Such efforts have yielded positive results and our exports are growing in this region.

Projection of the soft image of Pakistan in Australia is deemed essential to increasing trade volumes with various trading nations of the world. Not only the government authorities but also the leading businessmen from Pakistan share the same view and strongly advocate it. Accordingly, for the first time in the history of Sydney, a grand cultural event - Pakistan Folk Music and Cultural Festival – was organized by Pakistan’s Trade Mission in Australia from 21 to 23 March 2015, in the heart of Sydney city. The musicians and instrumentalists from Punjab, Sindh, Balochistan, Khyber-Pakhtoonkhwa and Gilgit-Baltistan travelled all the way from Pakistan to Sydney and enthralled the wide variety of Australian and Australian-Pakistani audience. Besides, with the assistance of Koocha-e-Saqafat (The House of Culture), and under the supervision of Anjum Ayaz, a renowned artist, sculptor, calligrapher and painter, a pictorial exhibition, titled “This is Pakistan – The epitome of the Indus Valley and Gandhara Civilizations” was also organized during the festival. The idea was to project the true and soft image of Pakistan, an art-admiring and a music-loving nation.

The Trade Mission of Pakistan in Sydney has chalked out a pro-active and progressive strategy for the next three years ahead so as to effectively project the image of Pakistan in Australia and to further boost Pakistani exports in the region. In view of the growing interest and increasing interactions among the people and the businesses of the two countries, there are promising prospects for further strengthening of trade and economic relations between Australia and Pakistan.