It gives me a great pleasure to inform readers of “Sada-e-Watan” that we have recently formed a Theatre group called “Adakar” and will be staging its first production “Kanjoos” on Sat,18th October 2014 at Riverside Theatres. The play is adapted by Hazrat Awara of All Indian Radio and is directed by me. For more details please see attached flyer and below a short introduction of the play.

‘Adakar’ is a new theatre and culture group seeking to promote emerging subcultures in contemporary Australia. Its current production of Kanjoos is an Indian adaptation of Molière’s French comedy “The Miser” in Urdu. The play is a colourful & lively costume drama which is scheduled to be staged at the Riverside Theatre on 18th October 2014. Directed by well-known Theatre and television personality Saba Zaidi Abdi, the production will showcase the local creative talent.

Set in mid-20th century Northern India, the play is a blend of satire and humor that explores the depth of human greed, lust and manipulation. Kanjoos follows the tribulations of Mirza Sakhawat Baig, who contrary to his name, is a stingy old man obsessed with the accumulation of his wealth. Seeking to marry both his children off for money, Mirza himself is determined to marry the young and attractive Mariyam – whose heart belongs to Mirza’s son Farrukh. The complication arises when Mirza’s treasure gets stolen. Steeped in family politics, greed, misunderstanding and laced with Molière’s comedic magic, Kanjoos is a must see production.. Kanjoos is an umbrella event of Parramasala Festival 2014.

All friends are invited to see this hilarious comedy. Please reserve this date in your diary and secure your seat early. Thank you.
Warm regards. 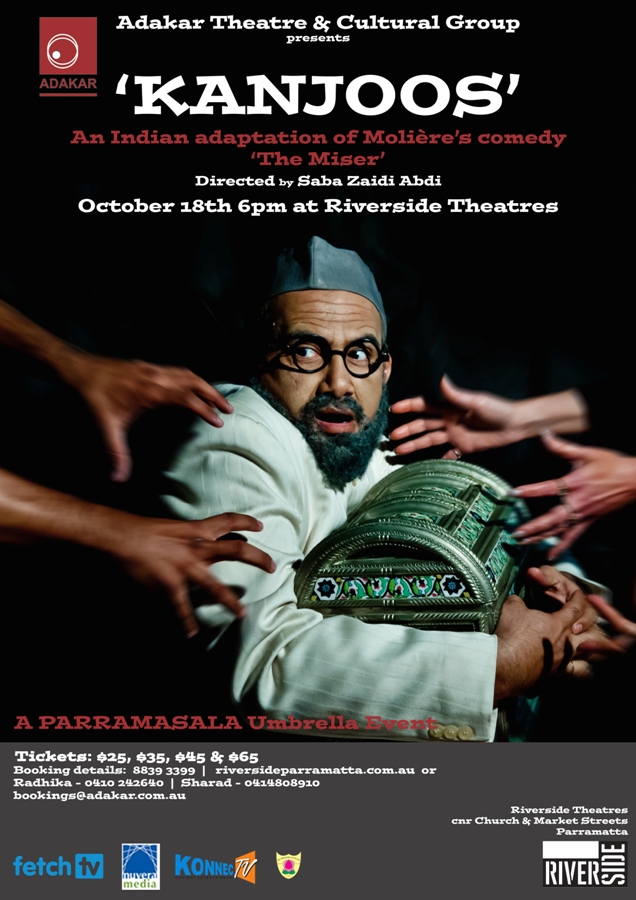