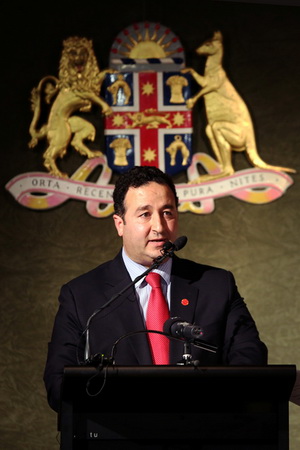 The Hon. SHAOQUETT MOSELMANE [4.03 p.m.]: I speak in debate on the Public Health (Tobacco) Amendment (E-cigarettes) Bill 2015 which has as its object is to amend the Public Health (Tobacco) Act 2008 to prohibit the sale of cigarettes and e-cigarette accessories to persons under the age of 18 years. E-cigarettes are rapidly gaining popularity amongst those in the community who choose to smoke but it is still a matter of conjecture as to whether these battery-powered vaporisers do more harm than good. Some argue that the cigarettes are a good alternative to smoking cigarettes as no smoke is being inhaled into the body or the lungs and mouth; rather, users are inhaling a vapour and are not introducing tar into their systems. Others argue that e-cigarettes normalise the concept and feeling of smoking and will encourage more people to smoke.

Restricting the sale of e-cigarettes to minors is a no-brainer. Indeed, there is no valid reason why minors should be allowed to smoke vaporisers if there is even the slightest chance—and I say there is—that it could lead to fully blown cigarette usage down the track. This bill does not go far enough. The Labor Opposition advocates that a stronger legislative framework is needed to protect the community. As well as a ban on the sale of e-cigarettes to minors, Labor wants to restrict the use of vaporisers and e-cigarettes in enclosed spaces in restaurants, bars and hotels, at bus stops, on public transport and in other non-smoking areas, and to bring the places where e-cigarettes can be used in line with current laws for cigarettes, cigars and argilleh—the hubble-bubble pipe. Currently proprietors of premises of bars and hotels decide whether vaporising is permitted on their premises on a case-by-case basis. The amendments foreshadowed by Labor will create uniformity across the State and bring surety to non-smokers as to where people can use cigarettes or vaporisers.

Labor is also arguing for restrictions on the advertising, promoting and display of e-cigarettes at retail outlets, similar to cigarettes and tobacco products being kept out of sight at supermarkets, service stations, newsagents and other similar retail outlets. Currently vaporisers can be found on the counter of any convenience store in plain view of children and minors. I take this opportunity to inform the House that one of my staff members recently purchased the e-cigarette I am holding for $3. It was not covered or hidden and it was available for purchase by children and minors. For obvious reasons Labor does not want to promote smoking, particularly by children and minors.

This bill is too weak. It is not strong enough to meet the expectations of members of the public who understandably are conscious of their health and the risks associated with smoking. The main game is to reduce the number of smoking-related deaths and illnesses. Banning the sale of e-cigarettes to minors simply does not go far enough. Whilst smoking an e-cigarette may not have the same detrimental effect as smoking generally, the risk of normalising the act of smoking, particularly to impressionable teenagers and adolescents, is sufficient for Labor to act. Each year smoking accounts for around 5,200 deaths and 44,000 hospitalisations. It is the leading cause of preventable disease and death in New South Wales and the Baird Government should be doing all that it can to curb this. Labor has a much more comprehensive plan. Indeed, the Heart Foundation has endorsed the bill but has asked the Government and the Minister for Health to do more.

E-cigarettes are made in sweet and fruity flavours, which appeal to the younger demographic. I am reminded of the chocolate made to look like a cigarette, which has now been banned. However, the same marketing concept exists with e-cigarettes. Statistics reveal that 7.5 per cent of children in New South Wales smoke—that is 7.5 per cent too many. We can do much better than that. It is terrible to see children and minors smoking at bus stops, train stations or outside shopping centres.

Not only is it bad for their health, and the health of all those around them through passive smoking; it also gives a perception of criminality, just like graffiti. This affects local economies by scaring off potential patrons. While the long-term health risks associated with e-cigarettes are yet to be determined, the biggest risk associated with them is as an entry point to cigarette smoking. With 5,200 deaths and 44,000 smoking-related hospitalisations per year, we as legislators must continue to be vigilant in protecting the community from the dangers of smoking. As my colleague the Hon. Walt Secord stated earlier in debate, the Opposition does not oppose the bill but does propose amendments to strengthen the legislation and bring the use and sale of e-cigarettes into line with current smoking laws.