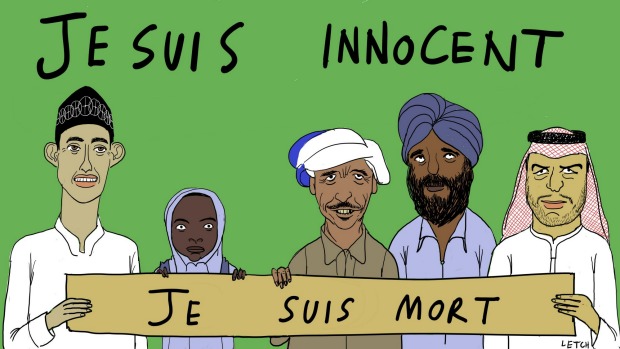 The general response in the West to the appalling January 7 Paris attacks show that the Western view of terrorism has barely changed since 9/11. The same themes persist - "they" are terrorising "us". "Their" moderates need to do more to stop "their" extremists from attacking "us". Why aren't more of "their" moderates speaking out? Why don't "they" respect "our" values? Why don't "they" take responsibility?

Surely holding all Muslims (one-quarter of the world's population) collectively responsible for the actions of fringe groups should be universally hounded as imbecilic. Instead, many of the "official" Muslim spokespeople have taken this exclusionary message to heart.

Each time there is a terrorist attack on a Western country, they all but trip over themselves and each other to condemn - at times not even waiting for anyone to confirm the actual motives of those ultimately held responsible.

The same set formula, the same mantras are reported. "We condemn. It has nothing to do with us or our faith."

One can hardly blame them for this. In the Australian imagination, terrorism and Islam are interchangeable.

Whether it be small evangelical and far-right groups complaining about halal certification of Vegemite or opponents of mosque developments, the spectre of terrorism is ever present.

Even after it was established that a fringe loner was responsible for the Martin Place attack, some commentators insisted "sheikh" Haron had a substantial following.

Those who scream the loudest about the alleged Islamic threat to Australia are often those complaining they aren't free to speak loudly about the threat because of "stifling political correctness" or Section 18Cof the Racial Discrimination Act.

Yet there's a new generation of Muslims born and brought up in Australia who better understand and are less afraid to engage with media, politics and mainstream culture than their elders.

Many of them see their elders' rush to condemn terrorist acts as having the opposite effect to that intended. They see their elders' statements as reinforcing a dominant mindset on Islam and Muslims that is patronising and at times even xenophobic.

Conventional wisdom about terrorism is certainly worth questioning.

Jihadist groups such as al-Qaeda and the Islamic State regard many, if not most, Muslims as kuffar, plural of kafir or infidel. These groups have killed a far greater number of Muslims than Jews and Christians.

In December, about 132 students and 13 staff at the Army Public School in the northern Pakistani city of Peshawar were gunned down by the Pakistan Taliban. The Peshawar attacks received nowhere near as much media coverage nor pious statements from world leaders.

Nor was there much said about Boko Haram's assaults in Nigeria. In one such assault, which took place around the same time as the Paris attack, more than 1000 people were murdered. The Nigerian schoolgirls have still not been captured, though they have been immortalised in a Charlie Hebdo cartoon depicting them as pregnant welfare queens demanding no one touch their payments.

Muslims are often accused of seeing themselves as victims. But when so little emphasis is placed on a far greater number of non-Western terror deaths, young Western Muslims can be forgiven for seeing this as an indication of chronic Western victimhood.

No one should be murdered for drawing cartoons or for working as a policeman or for visiting a supermarket. But our knowledge and consciousness of terrorism is almost always limited to our own cultural backyard. Our sense of reality is distorted.

According to the 2013 Global Terrorism Index, 80 per cent of all terrorism-related deaths occurred in Iraq, Afghanistan, Pakistan, Nigeria and Syria.

In sixth place was India, where terrorist deaths doubled. And who are the most feared group in India? "Communist terrorist groups are by far the most frequent perpetrators and the main cause of deaths in India," the report noted. "Three Maoist communist groups claimed responsibility for 192 deaths in 2013, which was nearly half of all deaths from terrorism in India."

The Maoist uprising, which started in 1967, has been operating in 20 of India's 29 states.

But is the hypocrisy and victimhood that pervades much of the Australian and the broader Western debate on terrorism enough reason for community spokespersons not to speak the truth and call a spade a spade?

Haters can allow their hate to compromise their beliefs. They can point the finger at Muslims for being terrorists whilst ignoring them - and others - as victims.

Perhaps the issue is not whether to condemn terrorism but rather when, to condemn all political violence regardless of who are perpetrators and who are victims. Ultimately it doesn't matter who the victims are. Unjustly killing one is equivalent to killing all humanity. Surely that's a Biblical and Qur'anic principle we can all agree on.​

Irfan Yusuf is a lawyer and author of Once Were Radicals: My Years as a Teenage Islamofascist.