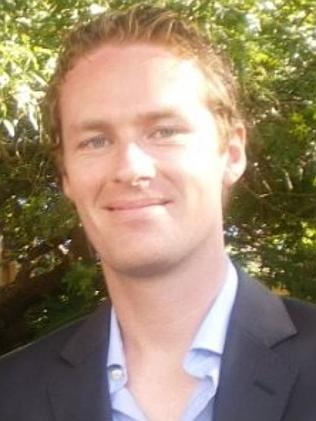 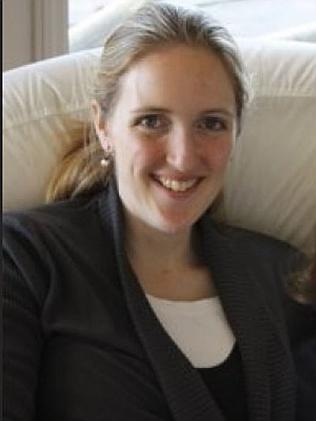 Hostage-taker and self-declared Muslim Sheikh Man Haron Monis walked into the cafe on Monday Morning of 15 Dec and held 17 people in a 16-hour siege. Just before police stormed the building, at least five hostages came running from the cafe with their hands up. NSW Police Commissioner Andrew Scipione said the situation changed suddenly inside the cafe, allowing more of the hostages to escape.

Police then made the quick decision to put their emergency action plan into place and they moved inside the building. Soon after police entered the cafe, paramedic crews who had been stationed at the scene throughout the day were seen carrying people out of the building on stretchers, and one patient could be seen being resuscitated. 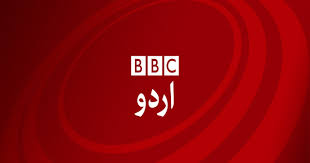 As the armed siege at a Sydney city cafe unfolded, the international media reacted. During the early morning of Tuesday, 16th Dec, Senior journalist Saqlain Imam who works for BBC’s Urdu World Service in London contacted Chief Editor of Sada-e-Watan, Syed Zafar Hussain, and asked questions about the latest situation of Sydney siege. Syed Zafar Hussain said that explosions and yelling was coming from the café and many frontline Police stormed the building for the safety of the hostages.

Police had stormed the building after explosions and yelling were heard about 2:10am. Mr Johnson tried to grab the gunman's weapon when he appeared to be falling asleep. Barrister and mother of three Katrina Dawson, 38, and Lindt cafe manager Tori Johnson, 34, were killed in the siege, along with 50-year-old gunman Man Haron Monis. 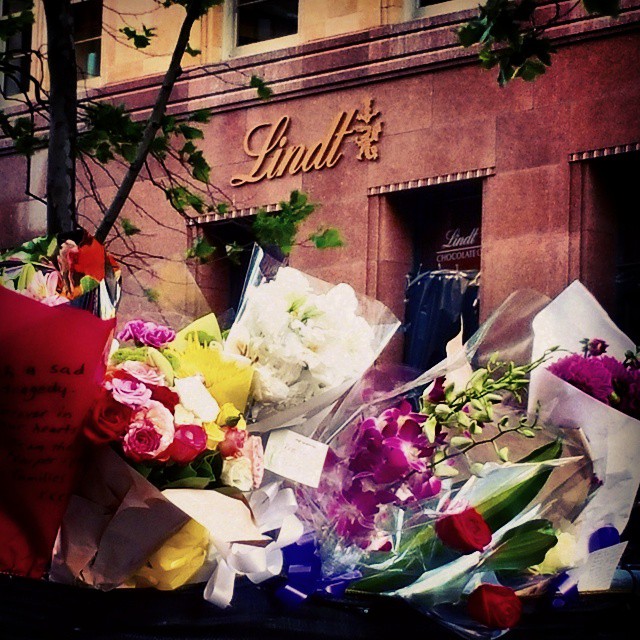 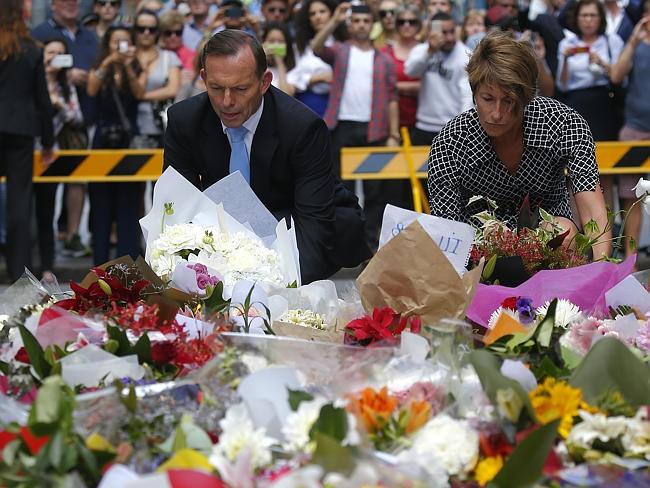 On Tuesday afternoon of 16 Dec 2014, Prime Minister Tony Abbott visited Martin Place, where he and hundreds of members of the public have left flowers and signed condolence books. Hundreds of floral tributes have been left in Sydney's Martin Place for the victims of a 16-hour siege which ended when police stormed the Lindt Chocolate Cafe early Tuesday, 16 Dec 2014. Memorial site under the MLC Centre, which has also been visited by Police Commissioner Andrew Scipione, Premier Mike Baird and Police Minister Stuart Ayres. Mr Baird had tears in his eyes as he lay flowers for the victims. 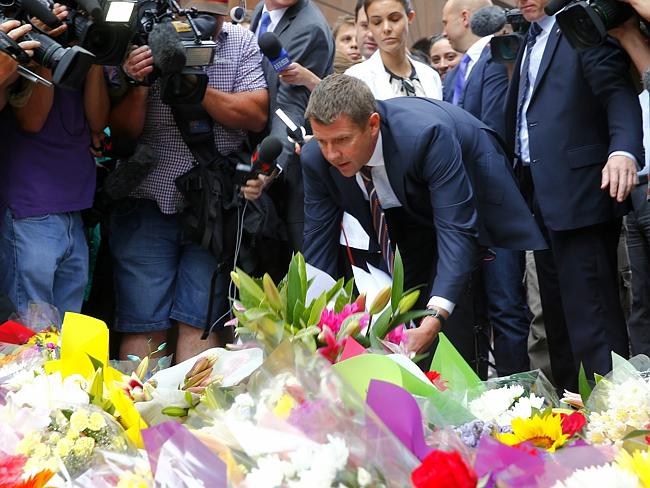 “Today the people of NSW and Australia have the heaviest of hearts and we are taking steps to allow the community to share our collective grief,” Mr Baird said.
“Overnight we lost two of our own people, in an attack we thought we’d never see here in our city.

Dozens of Muslim groups have issued a joint statement expressing sympathy for the families of those killed. Australia's Grand Mufti, Ibrahim Abu Mohammad, visited the special memorial in Martin Place and said the tragedy must not rob the nation of its values of tolerance and unity. 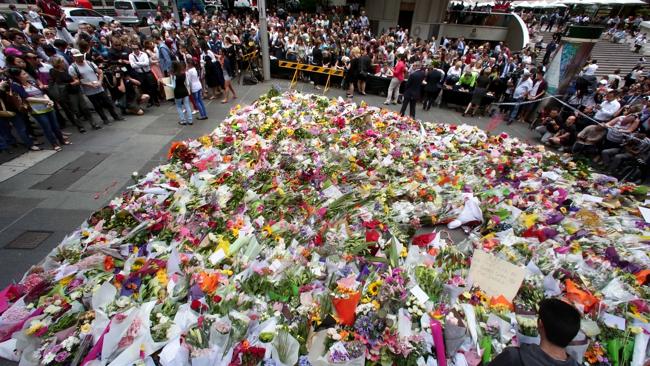 On the behalf of the Australian Muslim Community, Sada e Watan issued this statement; our deepest thoughts and sincere condolences to the people affected and their families.

“As Muslims, as Australian Muslims we share the grief and suffering of those who have gone through the ordeal last night, with the families of those who unfortunately have passed away.”

“We hope the Australian community can see that this is not something to do with the Muslim community. Our heart weeps for families and friends who effected in this tragedy but it also beats with pride that no matter what we are one nation one people and together we stand strong with other people. Our Police have been trained to cope with situations like this. Police wanted this incident to end with no any loss of life. They put their lives on the line to protect the community. We request Government that Bravery award should be given in honour of the deceased Lindt cafe manager Tori Johnson who died trying to take the gun from terrorist."

Australians awoke to the news this morning that the siege in Martin Place has ended.

Our thoughts and prayers are with the families of the two deceased hostages, the wounded and the other hostages.

I commend the courage and professionalism of the New South Wales Police and other emergency services involved.

Commonwealth agencies will continue to provide every support to New South Wales authorities.

The National Security Committee of Cabinet will meet shortly to review the situation.

NSW Premier Mike Baird has announced flags on all NSW Government buildings will fly at half-mast today to honour those who tragically lost their lives in the siege at the Lindt café in Sydney's CBD.

The Premier is also inviting people who wish to lay a floral tribute to the victims to do so at Martin Place. Condolence books will also be provided later today near the Martin Place water fountain, facing Pitt Street.

"Today the people of NSW and Australia have the heaviest of hearts and we are taking steps to allow the community to share our collective grief," Mr Baird said.
"Overnight we lost two of our own people, in an attack we thought we'd never see here in our city.

"However, the values we held dear yesterday we hold dear today. They are the values of freedom, democracy and harmony.
Our thoughts and prayers are with the innocent victims of this vicious, horrendous attack, their families and friends.

"I want to say to the victim's families and friends, everyone in NSW stands beside you. Today, tomorrow, forever.

"I pay tribute to the men and women of the NSW Police Force who have saved many lives over the past day and have risked their lives in doing so.
"I also want to pay tribute to all other emergency service workers and authorities who provided vital assistance.

"My thoughts remain with those hostages who have been freed. Every care they need at this traumatic time will be made available to them.
"We are a peaceful, harmonious society that is the envy of the world. How we react in coming days will further show who we are.

"I say to everyone today: We must come together like never before. We are stronger together. We will get through this together." 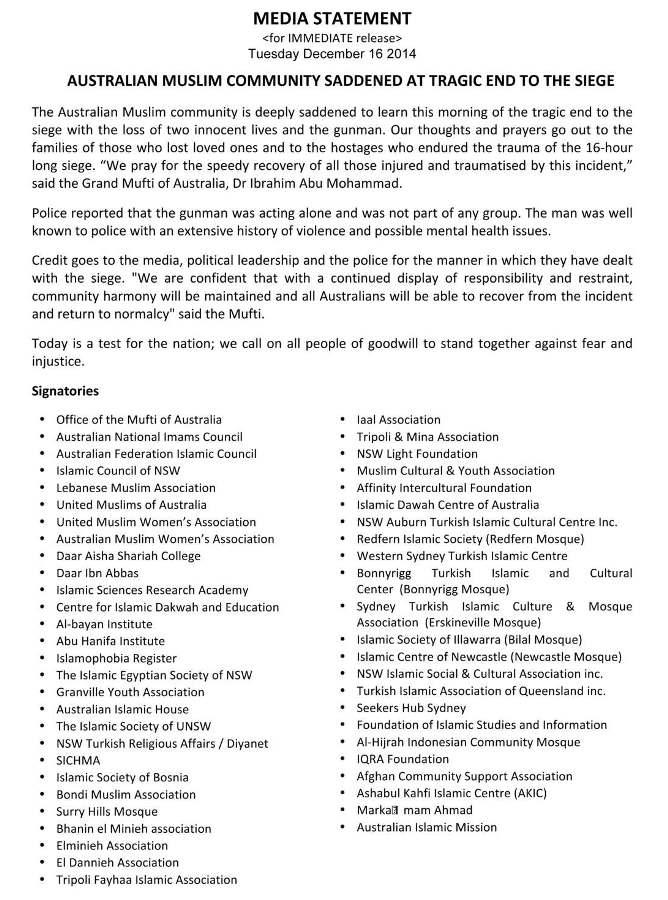 MESSAGE OF AMU Alumni of Australia

A crazy head had made his way to one of the best cafes in our city and held people hostages. The authorities made such an example out of this craziness that no other low life rotten excuse of humanity from this mentality ever dares even contemplate going in that direction!

We strongly condemn this crime and dragging of Islam into this individual criminal act.

It was very unfortunate that two innocent hostages lost their lives. Our prayers and hearts are with the deceased and their families!

It's a wakeup call and time to work together and support Team Australia to keep our cities and country safe and remain symbol of multicultural coexistence. 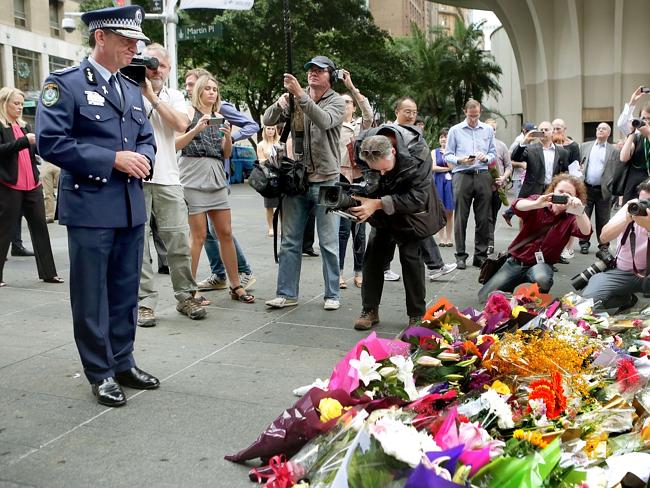 The NSWPF are asking for calmness and a strength of positive communication amongst our communities - as Commissioner Scipione and Premier Baird have stated this incident should not change our lives, this is a time to come together, not be divided.

The NSWPF urge our community brothers and sisters to go about their daily activities but if they see or hear anything suspicious to contact their local Police or if urgent ring 000. Police and community leaders are united in peace and will not tolerate bias motivated violence or targeting.

We further ask for our PMAC members to monitor communities carefully for any extreme criticisms or serious concerns expressed in our communities, especially expressions of retaliation, revenge or bias.

We all should be focusing on calmness amongst our friends, workmates, families, men, women and children.

Police will be present throughout our communities attending our shopping centres, schools, infrastructure sites and prayer houses over coming days and weeks to show harmony and we are always available to assist.

There will be zero tolerance to bias motivated crimes against any part of the community. All matters will be fully investigated, if offenders are identified they will be put before the Courts and the full force of the law will be applied.

The NSWPF will work with communities to ensure their safety and ensure they can live their daily lives without the fear of violence. 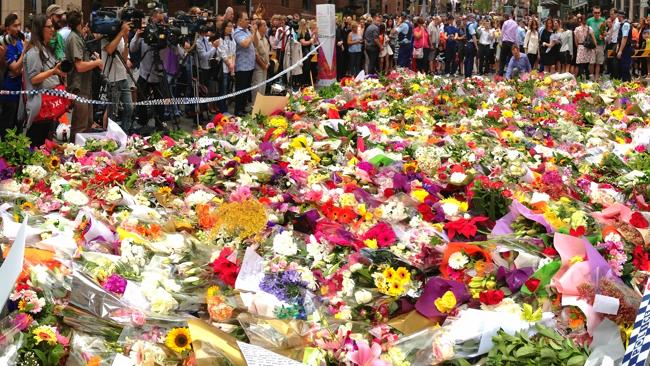 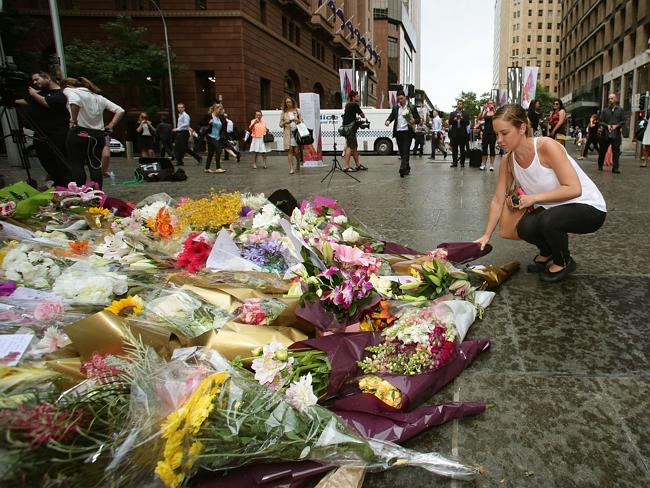 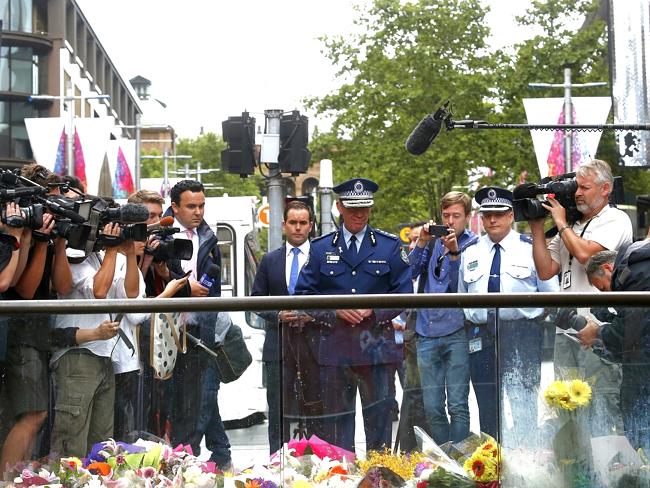 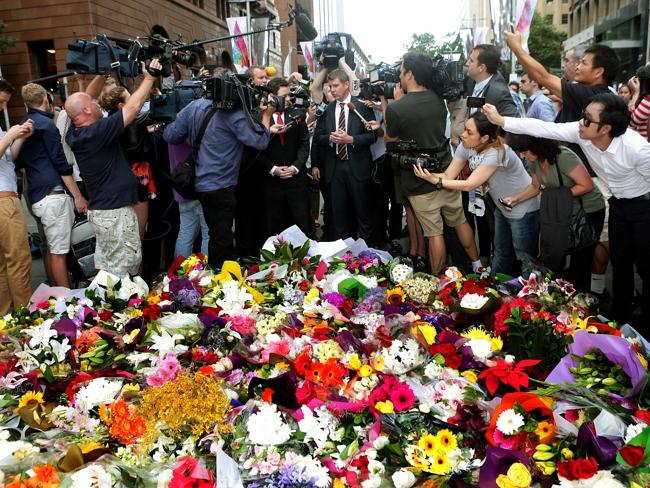 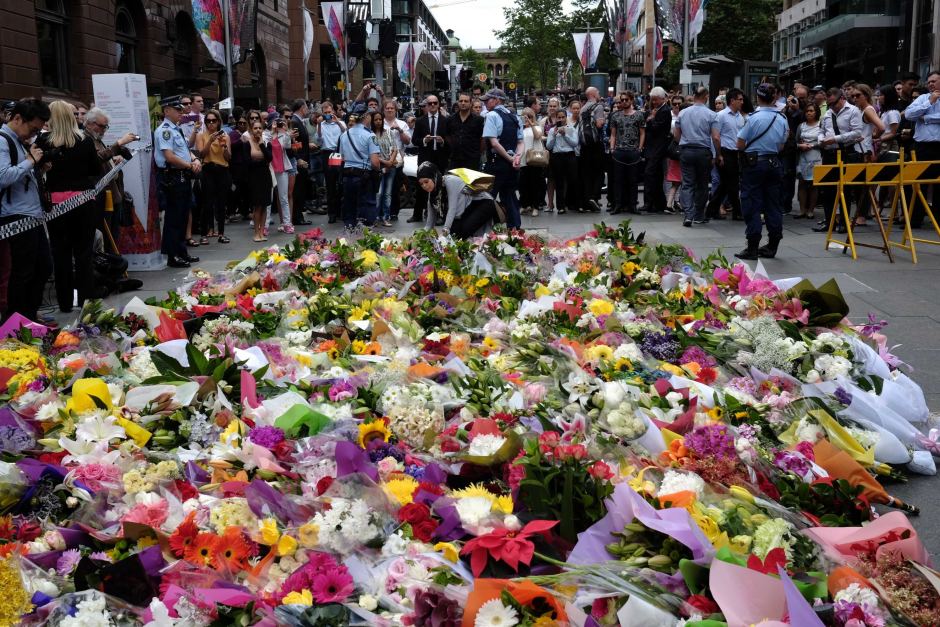