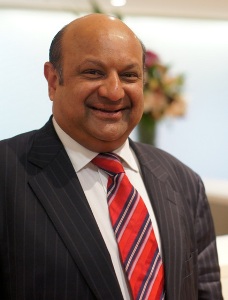 Former NSW Premier Nick Greiner was preferred Candidate for the role of SBS Chairman but Australian independent nominations panel recommended Sydney businessman Nihal Gupta who will be appointed as the next Chairman of SBS. Mr Gupta’s appointment has been approved by the Prime Minister Tony Abbott and Federal Cabinet. Sada-e-Watan expects that the Government will make a formal announcement within the next week. Mr. Nihal Gupta choice is under the merit based appointment guidelines and Mr. Nihal Gupta is first Indian Australian who achieves this highest post of Australian Government. Mr. Nihal Gupta is popular in all important Community groups and he is close Friend of Syed Zafar Hussain of Sada-e-Watan.

Mr. Nihal Gupta have strong business background in a related technology area, he Always providing financial assistance to community projects and considers Respectable personality in every Ethnic community. Mr. Nihal Gupta understands multicultural and communication needs of Business & all groups of Australian society. Mr. Gupta is preferred and acceptable for everyone. He is close friend of Liberal Party Leadership. He is Managing director of Digital Electronics Corporation Australia and Chairman of the Australian Securities Exchange-listed JCurve Solutions. He is also a member of the NSW government's Multicultural Business Advisory Panel.

Mr. Nihal Gupta has over 32 years' experience in the Consumer Electronics and Technology sector with leadership experience in sales, marketing and manufacturing. He is a recognised entrepreneur and has a strong background and understanding in International Business management throughout Australia and the Asia Pacific region. Mr Gupta's experience in importing and distributing consumer electronics and home appliance products has seen him closely working with predominantly China as well as India, Japan, Korea, Taiwan and Hong Kong amongst others.

Mr. Nihal Gupta is a Director on the board of the Asia Society Australia and a board member of Australia's international Contemporary Arts and Cultural Festival Parramasala Limited. Mr Gupta has been appointed to the NSW Minister's Consultative Committee to represent the State's Indian Community. He is also a member of the Judicial Commission of New South Wales and is a Trustee to the Sydney Cricket and Sports Ground Board. He is also an Ambassador for Cricket NSW's Mosaic program.

On the behalf of Australian Pakistani Community, we congratulate Mr. Nihal Gupta for appointment as Chairman of SBS. We believe Mr. Nihal Gupta is suitable person for this highest job. We appreciate Federal Govt choice of nominations and fully support this decision. We hope Mr. Nihal Gupta will improved SBS standard and direction and play active positive role in the public interests because he have a capability to improve SBS reputation and SBS Board.