Pakistan will play 2 World Cup Warm up Matches in Sydney. Tickets are free to the general public and available via the cricket world cup website: www.cricketworldcup.com

The first game will be against Bangladesh at the Blacktown International Sports park on Monday, February 9 followed by another warm-up match against England on Wednesday 11 February at the Sydney Cricket Ground.

Pakistan will then commence their ICC Cricket World Cup campaign on Sunday 15 February against India in a sold-out match at Adelaide Oval. Pakistan are not scheduled to play any group matches in Sydney so the warm-up matches present a good opportunity to see the team in action.

Minister for Citizenship and Communities Victor Dominello said the warm-up matches would allow fans from all nations to get an early look at the visiting teams.

"The sport of cricket has demonstrated its ability to bring together people from diverse backgrounds and cultures right across the globe," Mr Dominello said.

"Sydney is a truly global city and I know the visiting teams will receive great support during these warm-up matches from both international visitors and Sydneysiders who want to get behind their country of origin."

The Sydney Cricket Ground will play to host several high profile matches during the ICC Cricket World Cup 2015 including Australia v Sri Lanka, a Quarter Final and a Semi Final. 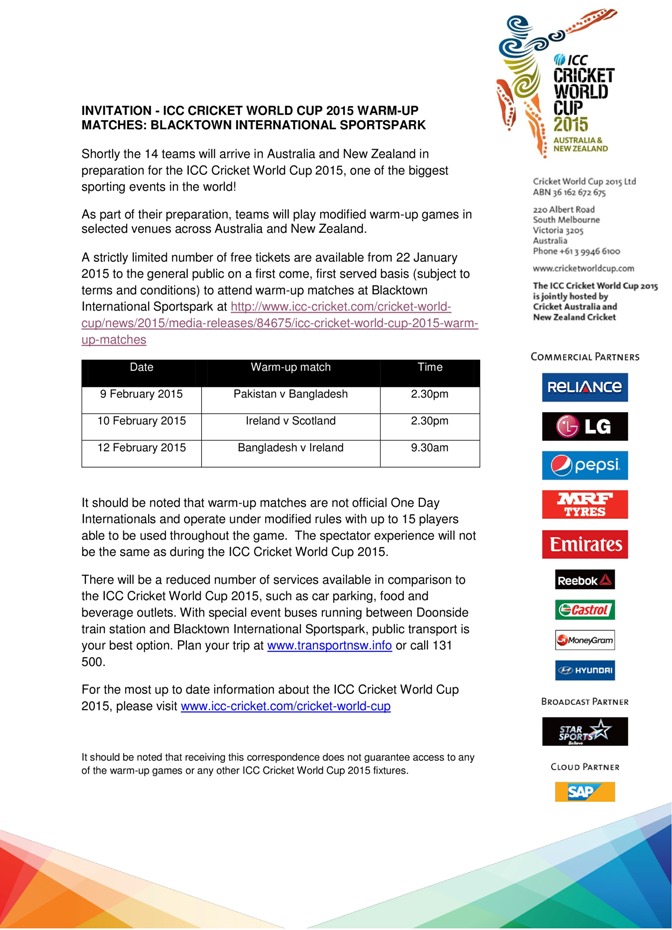