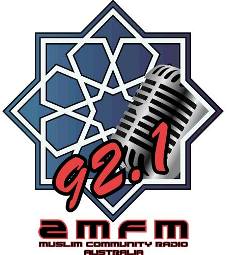 ‘Together, Standing Against Extremism and Racism’ - A winner with the Community

In its efforts to acknowledge the strengths of ethnic diversity in NSW, on Monday 12 October 2015, Multicultural NSW hosted the Australian Multicultural Marketing Awards Gala Presentation Ceremony at the Sydney Opera House.

The Australian Multicultural Marketing Awards Program gives recognition to a number of marketing campaigns developed and delivered by a number of big and small businesses, the public sector, as well as cultural, community and youth organisations across nine award categories.
Among the nine categories - including the communication, small business, big business, arts and culture, communities, education, youth and public sector awards - was the SBS People’s Choice Award.

It was in this category that 2mfm’s “Together, Standing against Extremism and Racism” campaign emerged as a very deserving winner, re-confirming what has long been known about the Muslim Community Radio’s popularity with the Muslim and wider community, making it the community’s chosen voice of moderation.
2mfm’s success in this category underscores the public’s desire for awareness programs which warn against the damaging effects of extremism, radicalisation and racism as well as its willingness to give recognition to genuine efforts made by members of the Muslim community in tackling these serious social issues.

Among the elements which have the potential to destabilise and alienate the Muslim community, is racial violence and religious vilification. Many examples of which have been documented, since the first large-scale terror raids took place on the 18th of September 2014, and following other similar terror-related incidents.
Initiated directly after, and in response to the first wave of terror raids in Sydney was a notable rise in racially-fuelled attacks,As a result, 2MFM developed a comprehensive and engaging media coverage which focused on informing the diverse greater Sydney Muslim community about the introduction of new Australian anti-terror laws, educating them about the risks of extremism, and providing reassurance to members of the Muslim community on how to deal with the repercussions of terror related incidents whilst promoting positive engagement and collaboration between police officials, government agencies and the Muslim community.

2MFM’s media coverage encompassed two components. The first was the Anti-terrorism and anti-extremism one which aimed at informing listeners about the risks of extremism and the new anti-terror laws; and provided them with much needed reassurance.

The second component was the Anti-racial behaviour and attacks which offered an insight into the incidence of racism in Australia and strategies to help people deal appropriately with racist attacks or commentary to empower them in the face of racism.

In addition to interviewing key figures from a range of concerned departments, we developed a series of bilingual announcements warning against befriending individuals or engaging with groups who may be associated with extremist factions, or support radical ideologies in addition to reminding listeners of the Prophet’s Hadith which cautions against engaging or supporting any kind of extremism.

Supplementing the broadcast component of the campaign, posters featuring religious quotes denouncing extremism were dispersed and displayed in mosques, community centres and schools; these posters were bearing the campaign title, “Together standing against extremism and racism.

One of the most crucial elements of the campaign was producing a special episode of Hukmuddine (Islamic) program. As part of this bilingual, question and answer style program, his eminence Sheikh Ibrahim Al-Shafie, representing Darulfatwa – Islamic High Council of Australia answered listeners’ questions about the notion of extremism. He also elucidated the meaning of extremism and Islam’s opposition to all forms of radical and extremist behaviours and ideologies, and he identified the important role religious organisations, schools and families play in the de-radicalisation of affected individuals.

After accepting the award, President of 2MFM, Mr Rafic Hussein reiterated the Muslim Community Radio’s commitment to countering extremism and racism, and underlined the aim of the campaign in helping to build a safe and harmonious Australian society, saying:
“This award highlights the value of the people of Sydney toward living in peace and harmony and of course working together to fight the toxic effects of radicalisation and racism.”

Moreover, emphasising the importance of producing similar projects, the Media campaign coordinator, Mrs Faten El Dana OAM said:
“We work alongside the Australian community for the betterment of a well-informed, cohesive society through open dialogue to help deal with sensitive issues like extremism and cultural stereotypes that affect our daily lives.”

2MFM was congratulated by a number of dignitaries who attended the ceremony. Among them was the Managing Director of SBS, Michael Ebed, who recognised the significance of the 2mfm campaign in the following statement:
“I think it is a really fantastic initiative, and I really commend the network for doing it, it’s very, very good.”

He also acknowledged 2mfm’s effort to engage the diverse community through the 2mfm campaign, “Together, standing against extremism and racism”, saying:
“What I love about the campaign is that it talks to the community, talks to the youth, the elders with different messages and at the same time, I think engaging with the broader Australian community to say this is what we as a community are doing within our own community and that would give comfort to a lot of people who may not understand some of the complex issues that we are dealing with at the moment.”

The significance of this award category was also given recognition by SBS World News anchor, Anton Enus, who said:
“It’s a great award to win because it’s a democratic award, everyone votes for that. So, it’s not the judge’s decision it’s the peoples decision. So I think that is a very important thing. There’s clearly within the Australian community, a lot of support for that kind of work.”
“To see this kind of work being recognized through your organization is a great shot of confidence for all of us.”

Similarly, Mr Hakan Harman, Chief Executive Officer, Multicultural NSW was equally impressed with 2mfm’s win and efforts. He said:
“It’s wonderful to see our communities and so many sections of our society who are winners today, but in particular to win the People’s Choice Award, I think that is fantastic.”

Acknowledging the long-standing commitment of the Muslim community in promoting messages of peace and harmony, he also said:
“The Muslim community has been a key part of every consultation that we have ever done. They’re proactive; they’re involved in any programs that we run as Multicultural NSW and broader government programs and I find them totally committed to living and advocating for peace, harmony and social cohesion.”
Commenting on the marvellous win, Dr. Harry Harinath Chairman of the Multicultural NSW delivered the following congratulation words:
“It is fantastic work your radio has done as people’s choice.”

Also, giving tribute to the effort made by 2mfm to establish a momentous campaign NSW Anti-Discrimination Board president, Dr Stepan Kerkyasharian said:
“Congratulations are due to Muslim Radio for winning this award especially because it’s an award that has been voted for by the people. That shows that people appreciate what is being done.”

“The radio itself has always been about integration, about being living together in harmony, you have informed people of their rights and also of their responsibilities. So, well done!” 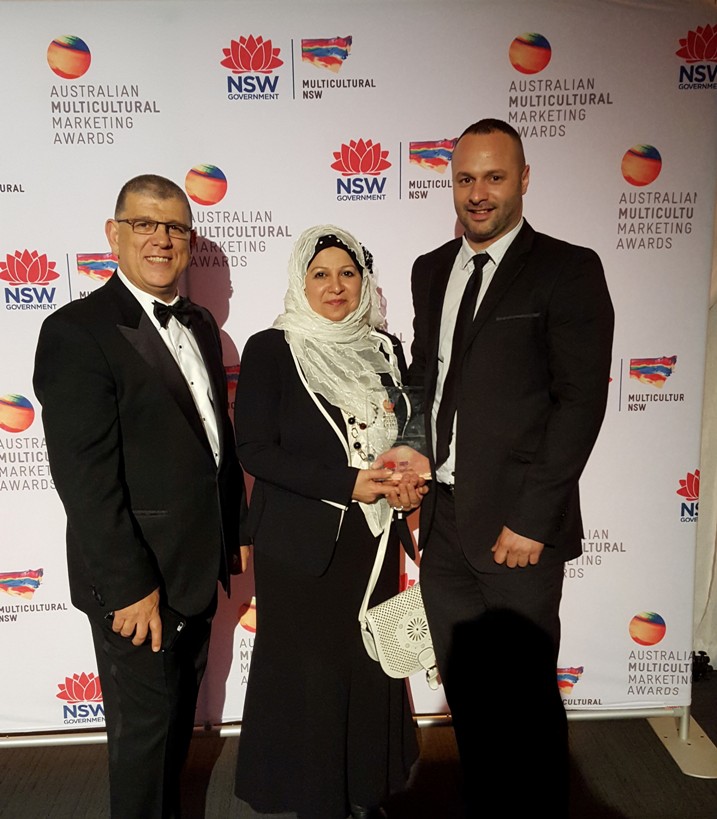 Furthermore, acknowledging the great contribution made by the Muslim community in Australia, Minister for Multiculturalism, Mr John Ajaka, MLC said:
“I congratulate the Muslim community for all the great things that they do, the great contributions they make to our state and Australia.”
In turn, the 2mfm team thanks Multicultural NSW, for providing this opportunity, as it thanks the community for their trust, support and votes. 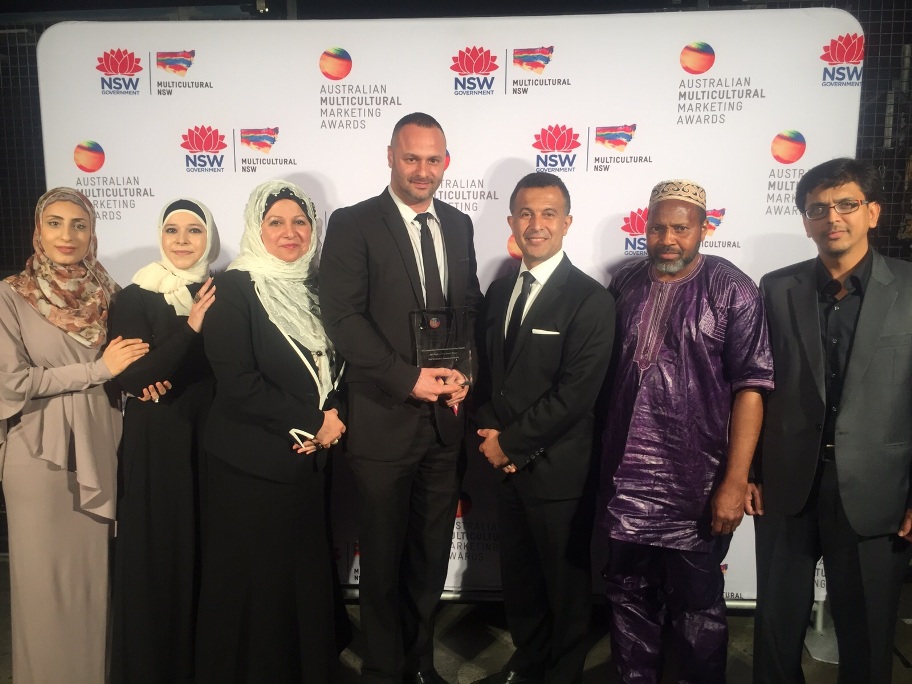