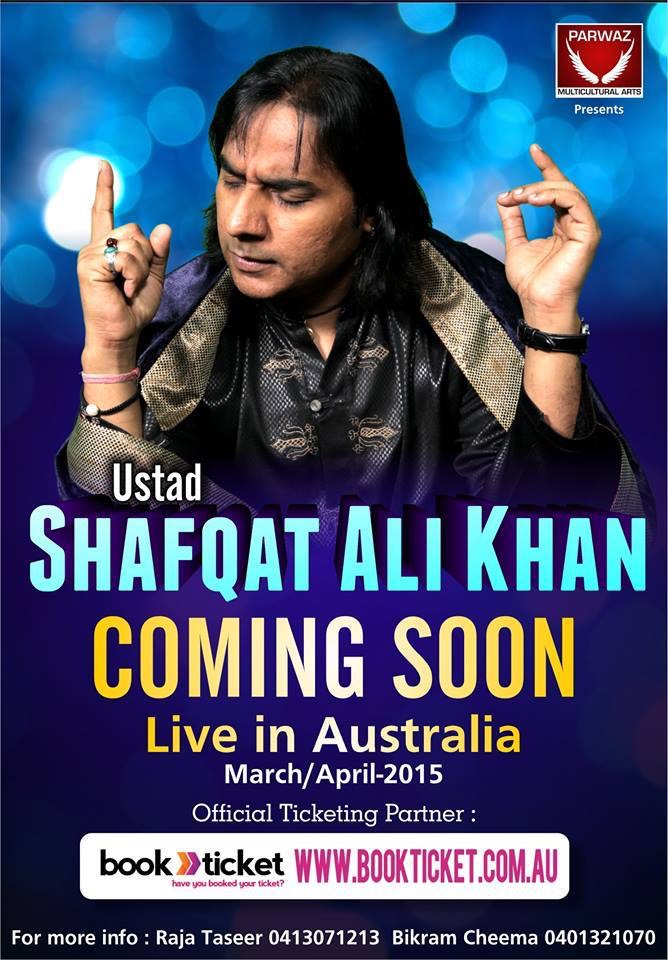 Pakistani Sufi and Ghazal singer Ustad Shafqat Ali Khan (Born June 17, 1972 Lahore Pakistan) belongs to the Sham Churasi School from East Punjab. This school of music has a long tradition that dates to the Mughul times of Emperor Akbar. This school was established by the two brothers Chand Khan and Suraj Khan. His uncle Ustad Nazakat Ali Khan and father Ustad Salamat Ali Khan, the internationally acclaimed classical singers, from the 10th generation of the Sham Churasi School.

Shafqat began performing at the age of seven. His first performance was at the Lahore Music Festival in 1979. Shafqat has performed throughout Europe with several important concerts in France, the United Kingdom, Italy, Germany, Holland, Spain, and Switzerland Geneva Festival. He is a well-established performer throughout India, Pakistan and Bangladesh. He has performed as well throughout Canada and the United States with some key performances at the Smithsonian Institute in the 1988 and 1996, and for the World Music Institute at the New York’s Metropolitan Museum in 1988 and Merkin Concert Hall in 1991.

Shafqat in the recipient of a number of awards, in 1986 in Lahore he received the Amir Khusro Award as the best young classical singer. In 1987, he received the Gold Medal from Faisalabad University, Pakistan. In 1995 he received the Ghanda Award from New Deli University. He has appeared on recordings from Nimbus (UK), EMI (India), HMV (UK), Water Lily Acoustics (USA), Westron (India), Mega Sound (India), Keytune Production (Holland), Plus Music (India) (forthcoming), and Folk Heritage (Pakistan).
Mr Shafqat Ali Khan is the youngest singer of Pakistan who received pride of performance from Pakistani government.

Mr Khan prays five times a day, doesn’t smoke or drink. “My music includes praising God as He alone is worthy of it,” said the singer. “He will sustain us.”
In Shafqat’s view, music represents a single language shared by mankind. His own tastes in recreational listening – including symphonic works, pop, jazz and opera – evince a fundamentally eclectic nature and a willingness to experiment. Both Shafqat and his father share a love of Nat King Cole’s singing. Shafqat cites Cole’s vocals as coming “Straight from the heart.