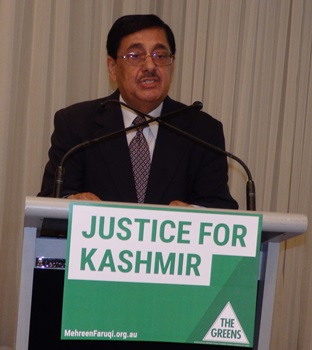 Community Forum on Justice For Kashmir

(Following is the transcript of Ambassador Khizar Niazi’s address)

Thanks Senator Faruqi and the Greens for hosting this event. It’s an honor to address a cross-section of civil society; and share thoughts on human rights violations in the Indian-Held Kashmir (IHK), and Australia’s pathetic silence on a human tragedy of such magnitude.

Quite naturally, therefore, there was instant reaction from the Kashmiris, which was met with ruthless suppression from the government of India.

Curfew was imposed …. as a result, citizens were put under house arrest; … communication with out-side world blocked - no fone no internet …freedom of movement was restricted; … public meetings banned; … democratically elected public representatives locked up … and the state handed over to security forces.

Today, there are over 900,000 security personnel in the territory of 8 million people. Given the normal size of an average family in that part of the world, there is a soldier at every doorstep.

AI representative Joel Clark is going to refresh our memories about the gruesome human rights violations that have taken place there since then.

AI knows, you know, I know, in fact, the entire world knows that since the 5th of August, IHK has been reduced to the highest militarized zone in the world and the largest prison on the face of this earth.

But, ironically, the news has not as yet reached Canberra, the capital of Australia; …. And this is despite the fact that we have one of the most outstanding diplomatic presence in that part of the world … and despite our claims that our media is vigilant, very well-informed and “fiercely independent”.

To be honest, as an Australian citizen, I am highly embarrassed, in fact ashamed, to confess that even Indian media and the Opposition are more vocal in condemning human rights violations in IHK than our government, major opposition party and the media.

I am ashamed coz: When people ask me as to why on earth I had to come all the way to settle at this end of the world, I tell them proudly that Australia is a multi-cultural and multi-religious secular society… It believes in personal freedoms, human rights and the rule of law… It whole-heartedly upholds human rights, not only within its own territorial jurisdiction… but also in its immediate neighborhood… not only that but also in far off places in the Middle East and Africa.

I proudly tell them that Australia is known for protecting rights of even its sold livestock. And, to my utter surprise, doesn’t allow killing of even snakes. 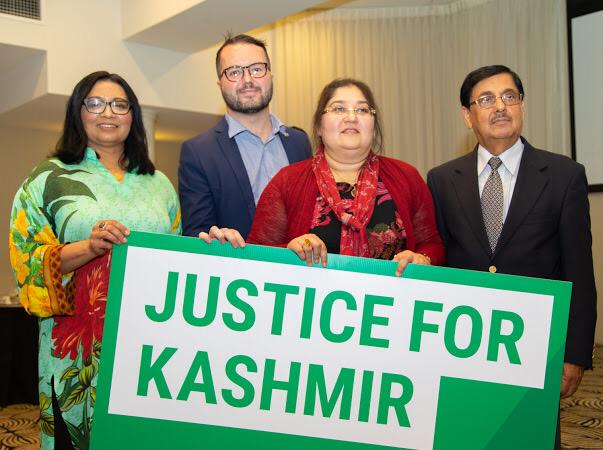 It was against this background that I felt re-assured by the positions taken by the three major political parties on human rights before the 2nd July federal election. The Human Rights Watch provided them with a questionnaire. And according to their responses published its report of 21st June 2016, the Coalition reiterated its “willingness to speak out against human rights violations and abuses … play an active part in  Human Rights Council resolutions on freedom of expression,”etc. etc. ….”human rights and the internet, and civil society.”

The Labor Party said that they will privately and publicly raise concerns about human rights abuses in other countries.

The Greens said that, “Australia should speak more forthrightly about human rights violations in countries, particularly in our region and those with whom we have direct trade and political relationships.”

Elaine Pearson, Australia Director at Human Rights Watch expressed the hope that “this information will be helpful to voters in deciding which party to support.” She continued that: “Whoever wins should know that civil society will be monitoring their actions from day one.”

These were the lofty claims then … But what are the ground realities today?

Except for the Greens, all are mum on the HR violations in IHK. And, let me clarify, I am not Greens, neither their supporter, nor voter; I am speaking here as an Australian citizen – a senior citizen, too old to flatter or make a factually incorrect statement to please someone; it’s only today that I met Senator Faruqi face to face. Let there be no misunderstanding that I am holding any brief. I am just speaking my heart our and calling a spade a spade.

Now leaving the Greens aside … Just look at the mysterious bi-partisan silence in partisan Australia on the atrocities in IHK… Look at the gap between their precepts and practice… Or, shall I say, double standards?... Hypocrisy?... moral bankruptcy?

Our hearts bleed, and rightly so, at human rights violations in Hong Kong … But what happens to our hearts and conscience when it comes to IHK? … Are there any halal and haram human rights? … Is our conscience selective; or malfunctioning?

Does this make any sense to you? … Isn’t it totally incomprehensible? … Isn’t it mind-boggling?

Pearson said: the claims made by the three major parties “will be helpful to voters in deciding which party to support.” … “Whoever wins should know that civil society will be monitoring their actions from day one.”

If I may ask, as voters, and members of civil society, haven’t we been duped? … cheated? … let-down?

Haven’t they lost credibility in our eyes?

Can we trust their words at face value?

I will be surprised if anyone here would say ‘NO’.

And what about our self-proclaimed fiercely independent media?... I proudly recall/share with friends the storm raised by our media over the indecent tone and tenor of an overseas cricketer in an interview with one of our female sports journalists. And wonder how and why the same media is silent on the rampant sexual abuses in the IHK.

To cut the long story short, our government, major opposition party and the media are deliberately playing deaf and dumb… conniving at … condoning … and pretending ignorance of the human rights violations in IHK. But the question is why?

To me, national interest in states is what animal instinct is in humans. Civilized societies harness animal instincts of humans through laws and morality. Quite logically, therefore, it is incumbent on civilized nations like Australia to do whatever is possible to harness national interests of states in the global village. This can be done only by respecting and observing international laws, UN Charter, its conventions, and resolutions.

As for the second question as to what is Australia’s national interest, I strongly believe that it lies in standing on principles.

Let me explain, how?

English philosopher Hobbes said ‘Might is Right.’ The Italian Machiavelli said ‘the end justifies the means’. And the Indian Chanakya agreed with both.

Australia is not a Super Power. Nor a fascist state, governed by admirers of Hitler and Mussolini. It prides in its democratic and secular credentials and its reputation as a champion of human rights.

Let’s not forget that Australia is just a medium-sized nation in every sense of the world, dependent even for its defense on allies. And history is witness to the effect that no alliance is forever. Just recall the Cold War era and allies of that time. What happened to the NAM and its members?

Let’s also not forget that one development of consequence anywhere in the world or one maverick sitting in the White House can pull the rug from under our feet. And, God forbid, we could be at the receiving end. We must, therefore, be realistic, not be carried away by our bloated ego and perceived “power, clout or influence” and must stand on principles.

Yet again, and ironically so, our government wants us to believe that standing on principles would adversely affect our trade prospects. I reject this preposterous claim with every emphasis at my command.

I am not a businessman and would like to be corrected by one if I am wrong. For me, trade is a 2-way win-win affair. I would call it charity if it isn’t mutually beneficial. I will be living in fool’s paradise if I expected that some-one will do business with me even if they can get better deal from elsewhere.

Therefore, threats from trading partners in response to our principled position would mean that we are either being bluffed, bullied or blackmailed. It would be a shame indeed if we succumbed to such blackmail and threats.

As a student of history and international relations, I strongly believe that those who compromise on principles to achieve their objectives lose both… Nations, with compliant leadership, ever-ready to acquiesce to bullies on principles, are like rolling stones, which gather no mass … They lose respect even in the eyes of those they succumb to; and are, therefore, taken for granted and treated as camp-followers.

We are known to be a candid and self-respecting nation. We need far-sighted and upright statesmen, not myopic and spineless politicians. We need not be over-awed by fascists playing wolf and the lamb with their minorities. In any case what good can we expect from those who are so ruthless even with their own citizens?

I would, therefore, like to conclude by reminding our government of its electoral pledges given to us and urge it to honor them; and play an active role to alleviate sufferings of millions of besieged Kashmiris;

PM Morrison is visiting India in January. Without waiting till then, he must demand of them to: lift the curfew in IHK ; withdraw troops from there; restore communications; free detainees; restore freedom of movement, assembly, and expression; respect human rights of Kashmiris; and honor their right to self-determination as accepted in UNSC resolutions

Thank you very much. 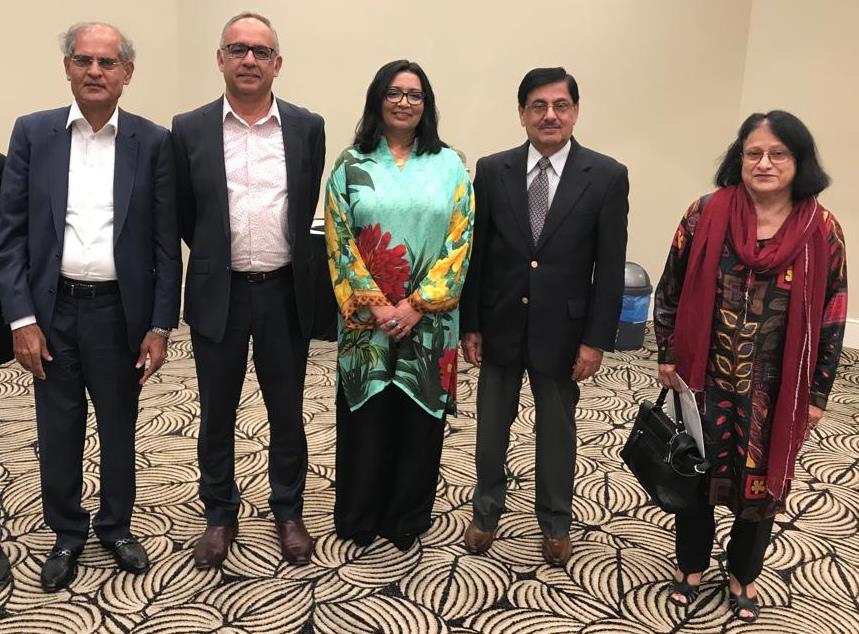