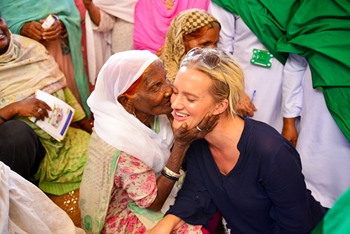 Pakistan-based Australian social justice advocate Shaniera Akram has joined a global campaign to end avoidable blindness by signing up as an Ambassador for The Fred Hollows Foundation.

Shaniera, who was born in Australia and is married to Pakistan cricket legend Wasim Akram, recently visited Chichawatni in Pakistan’s Punjab Province, to see patients undergo cataract surgery organised by The Foundation.

“Growing up in Australia, I worked on a number of charity events for The Fred Hollows Foundation in Melbourne. But seeing for myself how The Foundation is restoring sight in Pakistan has made such a huge impact in my heart,” Shaniera said.

“It was so wonderful to meet the women who could not see and didn’t think their sight could be restored and then to see them after the eye patches came off, it was very emotional and very empowering for them.

“Restoring sight to people in countries such as Pakistan isn’t just giving the gift of sight but restoring one’s position in their community and giving them back their dignity and livelihood. Fred Hollows does exactly that and I am so proud to be working with them.

“Pakistan is my home and the people are my family so I can proudly tell them there are some pretty cool people in Australia that donated funds so they can see again.”

Shaniera and Wasim was in Australia for the recent Australia v Pakistan Test series and to visit family.

The Fred Hollows Foundation has restored sight to more than 2.5 million people around the world over the past 27 years.

The Foundation has been working in Pakistan for more than 20 years, building local capacity in eye health by working with partners on the ground. In that time, the rate of blindness in Pakistan has halved.

“In Pakistan, nearly one in 10 people is visually impaired and more than 2 million people are blind in both eyes.

“Hundreds of people go blind every day from conditions like cataract but four out of five people who are blind don’t need to be.”

Shaniera said many people in Pakistan did not know that their blindness could be reversed with a relatively simple 20 minute surgery.

“I hope that my involvement will ensure more people in Pakistan and around the world can be helped by The Fred Hollows Foundation,” Shaniera said.

“For 22 years The Foundation has worked in Pakistan and now for the first time as an Ambassador I get to tell the Australian public and all of those who have donated that The Fred Hollows Foundation has truly done some incredible work and has continued Fred’s legacy.

“I have fallen in love with Pakistan from the inside out. I have lived here for eight years and working with Fred Hollows I don’t just get to see the impact the Australian Foundation has first-hand by restoring sight to so many vision impaired and blind people in Pakistan, I also get to show the world what Pakistan is like through my own eyes.

“On behalf of the beautiful people of Pakistan I say thank you to Australia for such kindness. Because of you so many people have been given the gift of sight once more.”

In 2018 in Pakistan, The Foundation worked with partners to:

During her visit, Shaniera was also briefed about The Foundation’s Comprehensive Eye Care for Female Agriculture and Cottage Workers project which is supported by the Australian NGO Cooperation Program (ANCP).