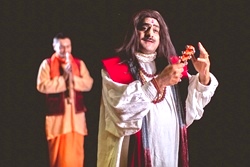 After the tremendous success of its previous major productions, Adakar Theatre and Cultural Group returns to the Sydney stage with “Shri Shri 420:” a fresh, innovative play which examines through a comedic lens the social interactions that shape our lives.

Adakar is a Sydney-based community theatre and arts group has established itself as a creator of high quality, engaging theatre that builds on the ties between the sub-continental diaspora and wider Australian society. Its previous sold-out productions include “Kanjoos” which was staged as part of the Parramasala Festival 2014, and Girish Karnad’s “Wedding Album” which was performed at NIDA Theatres in 2016 both were directed by Adakar’s Artistic Director, Saba Zaidi Abdi

This year, for the first time, Adakar has invited a director from India to lead the production of “Shri Shri 420” in conjunction with Saba. Writer-Director Atul Tiwari is a renowned figure in the theatre and film circles of India. He has written films such as “Mission Kashmir,” “Netaji Subhas Bose,” “Vishwroopam,” “Samvidhaan;” as well as acting in box office hits like “Three Idiots,” “P.K.” and “The Second Best Exotic Marigold Hotel.” Adakar’s production of “Shri Shri 420” will be co-directed by Atul and Saba, both of whom are graduates from the prestigious National School of Drama in India and have worked extensively within the Indian theatre world.

“Shri Shri 420” is the Indian adaptation of Molière’s masterful comedy “Tartuffe;” Atul has especially adapted “Tartuffe” into Hindi for Australian audiences. Taking its influences from the Indian cinematic canon, such as Raj Kapoor’s classic “Shri 420,” as well as Molière’s original source material, “Shri Shri 420” is a hilarious play that explores how in seeking a shortcut to spirituality, people can fall prey to phony ‘420’ Babas – and the considerable, often comical impact this can have on not only the individual, but on the lives of those around them.

“I am very excited about staging this hilarious comedy for the first time ever, written especially for Australian audiences and set against the backdrop of a Sydney-based Indian family. We are honoured to have eminent writer Atul Tiwari with us for “Shri Shri 420”, particularly as he has flown in from Mumbai for this project,” said Saba.

In taking a mirror to Indian society and highlighting the commodification of spirituality, Adakar presents a play that pushes the envelope whilst providing a fun-filled, entertaining experience for the whole family.

“Sydney has been a new and enjoyable experience for me. The enthusiasm, intensity and commitment of the actors and the other team members has compensated for the lack of time because of the busy life in Australia. Kudos to Adakar for being a flag bearer of Indian Theatre in a city of just 100 thousand Indians. I am sure Shri Shri 420 will be enjoyed and leave its own mark in the city full of Internationally acclaimed good theatre” 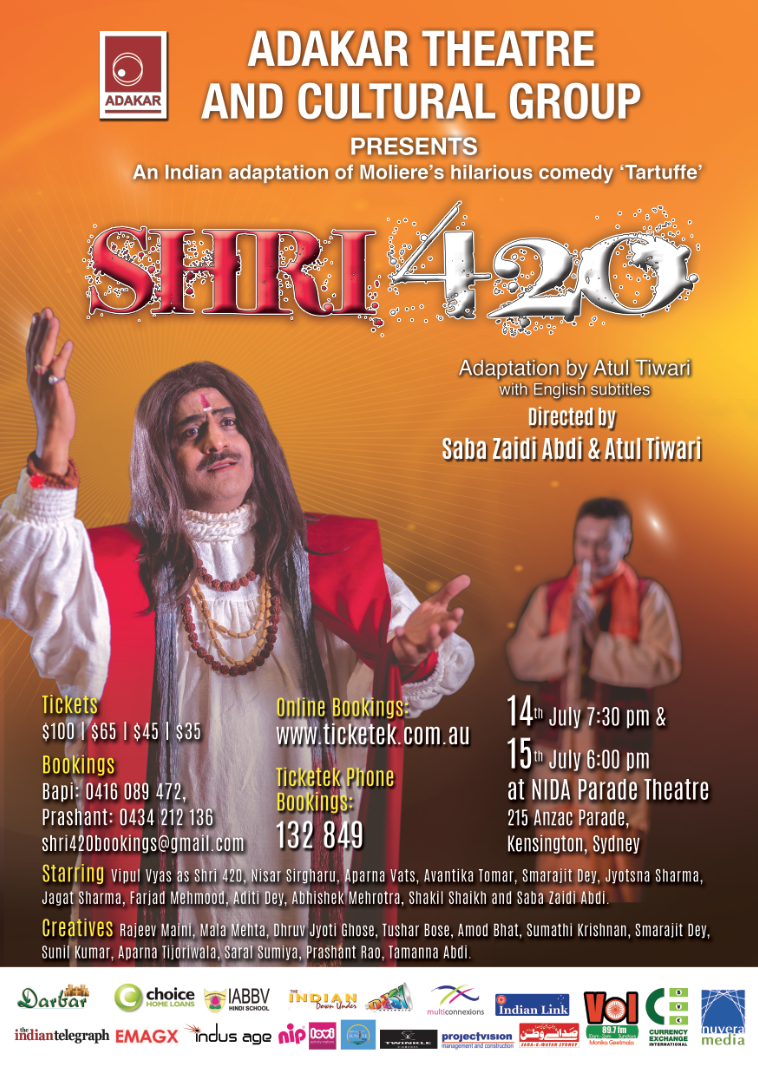