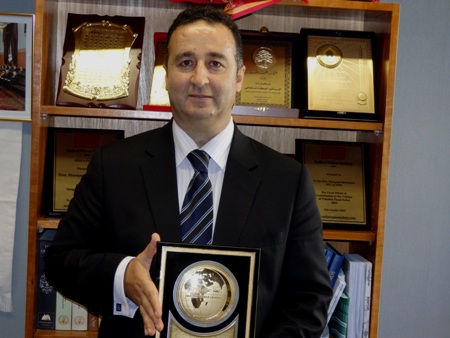 I would like to acknowledge the traditional owners of this land and pay my respects to their elders past and present.

His Excellency Nabil Al Saleh, Ambassador of Saudi Arabia to Australia and other distinguished embassy representatives.

Alsalamu Aalyakum and Good morning to you one and all.

I welcome you all to the Muslim world League Conference here in this oldest parliament in the country.

It is certainly an honour for me joined by my parliamentary colleague the Hon Catherine Cusak to be welcoming you and particularly our chief guest His Excellency Dr Sheikh Abdullah Bin Abdul Mohsin Al-Turki.

Our chief guest is a distinguished scholar.  First trained at the Sharia College in Ar-Riyadh, graduating in 1963 with a bachelor's degree in Islamic Law. In 1969 received his master’s degree at the Higher Law Institute in Er-Riad and in 1972 he presented a thesis on foundations of Islamic jurisprudence at Al-Azhar University, Cairo.

He taught at the Higher Scientific Institute from 1961 to 1969, and was Dean of the Arab Language College in Er-Riad from 1969 to 1975. He was appointed Provost of Imam Muhammad ibn Saud Islamic University in 1975, and later became rector of this university.

He had published numerous papers on Islamic studies, Sharia and Arabic language.

Your Excellency, it is an honor to be with you and have you here amongst distinguished friends.

I note that Your Excellency recently spoke at the14th Makkah Al-Mukarramah Conference on Human Rights.

His Excellency Shed light on the guidance of Islam pertaining to the rights enjoyed by individuals and groups and Islam’s compatibility with international covenants.

In his speech, His Excellency Emphasized Islamic Sharia’s distinction and precedence in safeguarding the freedom of man and his dignity.

He noted that any legitimate right for humans included in the Universal Declaration of Human Rights has a precedent in Islam but those Rights in Islam are tied to responsibilities. In exchange of every privilege, there’s a duty.

Your Excellency, as you will see during your stay, Australia reflects your universal view of human rights, giving citizens privileges but with those privileges they have responsibilities and obligations

Furthermore, Australia accepts all citizens no matter their background or faith, as having equal rights under the law. Its democratic system upholds the principles of multiculturalism, religious harmony, and the importance of promoting the ideals of genuine Human Rights for all.

This historic moment was symbolic but it was also indicative of our genuine multiculturalism, religious harmony and interfaith. It denotes genuine respect for those practising Islam and for people of all faiths.

It follows the Prophet’s message of peace, love, tolerance and acceptance.

This is what Islam is about and it is what Muslims are about.

It is also what Australia is all about.

On behalf of my colleague the Hon Catherine Cusack MLC and the NSW Parliament, I extend our warm welcome to you; wish you, Muslims NSW and all participants every success and a most enjoyable stay in Australia.