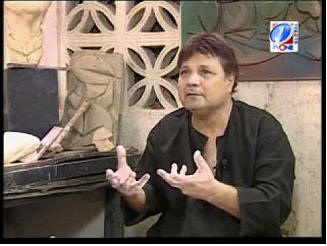 An internationally acclaimed Pakistani artist, Anjum Ayaz, will be visiting Australia from 21st April to 7th May 2013. Anjum Ayaz is a famous sculptor, calligrapher, and an actor who has exhibited his art all over the world including, Japan, USA, France, Canada, China, Holland, Australia and Dubai. He will be visiting Australia on the invitation of the Central Coast Islamic Culture Centre. Australia’s first Islamic Museum in Melbourne, where he will be presenting his concept about a permanent exhibit of his Islamic calligraphic art for this museum.

During his stay, Anjum Ayaz will also be showcasing his Islamic calligraphic art at the Grand Royale, Granville, NSW on 26th April to support the fundraising activities of Central Coast Islamic Society who is raising funds for the refurbishment of Wyong mosque. This event of fund raising dinner is open to all and those who would like to see the work of Mr Ayaz are encouraged to attend.

Anjum Ayaz as an actor has given theatrical performances in Pakistan, India and Australia on classical Urdu literature particularly on the work of famous Urdu writer, Saadat Hasan Manto. The Year of 2013 has been declared as the Year of Manto in the Urdu literary circles. In this connection, friends of Anjum Ayaz have organised an evening in his honour in Sydney to also commemorate the Year of Manto. Anjum Ayaz will perform at this evening by reading the work of Manto in his own unique style. The attendance to this event is by invitation only.