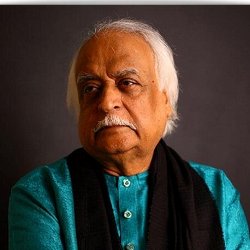 Anwar Maqsood will be Chief Guest of Universal Urdu Mushaira in Sydney on Saturday, 7 May 2016

Anwar Maqsood Hameedi usually acknowledged as Anwar Maqsood is a famous Pakistani playwright, poet, television host, satirist, humorist, infrequent actor and painter. He was born in 1935 at Hyderabad Deccan, British India, Now city of India. He has worked in the Pakistan entertainment industry for more than 35 years. He fits in to one of the more literary families based in Karachi, Pakistan.

He is the brother of famous Fatima Surayya Bajia, Zohra Nigah, Mrs. Kazmi and Zubaida Tariq. His son Bilal Maqsood is a pop singer associated with the highly prominent international band Strings. Anwar Maqsood is the most Multitalented Artist of the entertainment industry of Pakistan. He also writes plays on many susceptible and social issues. He is one of the Stout compare and script writer of Pakistan. His famous plays and comedy programs are Fifty Fifty, Aangan Terha, Half Plate, Studio Dhaai, Talaash, Sitara Aur Mehrunnisa, Nadan Nadia, Loose talk, Hum Pe Jo Guzarti Hai and many more.