Never seen before and the biggest of its kind! handmade Islamic Artwork from around the globe and from famous artist. All is up for auction plus much much more and entertainment throughout the evening! And as we are going “ALL OUT” the venue is at Grand Royale reception Hall in Grandville Sydney with full meal!

All proceeds are going to much needed and neglected renovations of Wyong Mosque located on the Central Coast. Over the years the deterioration of the asbestos roof of our beloved mosque has posed as a serious health hazard for the sisters and brothers in our community.

In response to the deteriorating state of Wyong Mosque we have planned the greatest and most entertaining event of its kind and ask you to come and join us, have fun and get rewarded!

Tickets are strictly limited! Bring your friends and family along inshaAllah for an unforgettable night. You surely won't be disappointed.

Khaled Khallafullah – do i really need to tell you who this comedian is?
“If there’s one act from this year who is going to go one to become a huge mainstream star, it’s Khalafalla. He’s got the looks, the charisma and the confidence to go a long way in comedy … If he’s not a regular on TV and radio in the next couple of years, I’ll print this page out and eat it.” The Age.

Kamal Saleh- His talk is inspirational, being a massive hit on youtube, but if you have not heard him (and may I say what rock are you living under) come and see him LIVE at the Event.

Zohab Khan- He has been actively writing poetry since the age of 13 and is a three-time Australian poetry slam finalist, what new spoken words does our brother have to say?

Anjum Ayaz- is a calligrapher, painter and sculptural artist who has exhibited around the world including Paris, Montreal, Tokyo, New York, Beijing, Holland, Dubai, Islamabad and Australia (Sculpture by the sea 2007-Bondi and has been involved with the first Islamic museum being built in VIC Australia).

Sheikh Shakeel Tariq- was born and raised in Australia and is currently an Islamic teacher in Faulkner VIC. He has articulated a mix of calligraphy and graffiti and is involved with Benevolence Australia. Sheikh Shakeel will be present on the day and will do artwork on the spot “personalised calligraphy” for 3 winning bidders. An opportunity not to be missed! Hope

If you can't make it OR would rather donate feel free to donate any amount to: 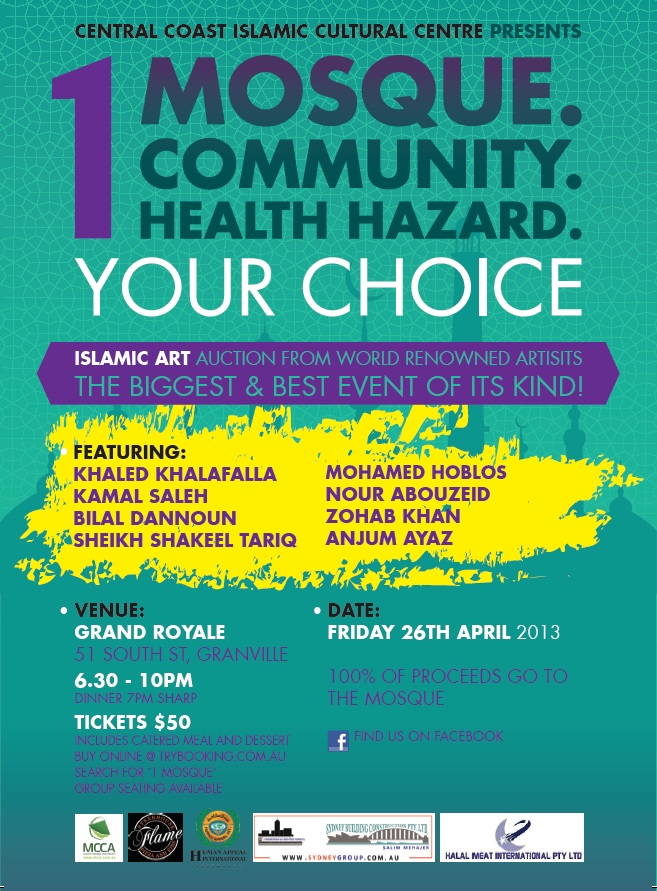