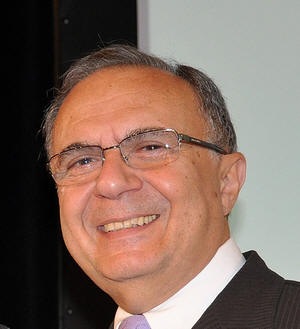 Chair of the Community Relations Commission of NSW Dr. Stepan Kerkyasharian will be Retired from his post on Friday, 17th January 2014

Young Australians are in danger of being lured into international conflicts, under the guise of defending their religious beliefs, according to the Chair of the Community Relations Commission of NSW, Stepan Kerkyasharian.

Dr. Kerkyasharian who is leaving his position after 25 years at the CRC and its predecessor the Ethnic Affairs Commission, where his principal role was to promote and maintain community harmony, was commenting out of concern for Australians lives being lost in Syria.

“These conflicts can be painted as holy wars and therefore swell the fervour of devout young Australians. This is false fervour. Young people are passionate and easily persuaded to a cause.

“We, as a community, must dissuade them. They are being duped. Of course one’s religious belief is central to their identity, but there are evil people in the world who simply seek power, political power. They seek fervent young men as cannon fodder to achieve that power.

“One moment of heady response to a false call to arms can destroy your chance to be a great and successful Australian in science, business, entertainment, sport, media or public life.

“Through its online youth magazine, The Point, the Commission has warned over the past six months of the dangers of getting involved in this conflict given the complex background of those fighting in Syria. Now the broader community is becoming aware of this danger and politicians must respond to those concerns”, he said.

Dr Kerkyasharian pointed out that the increasingly complex nature of the current conflicts across the Middle East made them very dangerous because they could give rise to regimes based on rule by terrorism.
He also drew attention to the many innocent victims.

“We should feel sympathy for those victims and there is important humanitarian work to be done there.
“I feel it is important that young people talk to their school mates, uni mates, work mates and to listen to their advice about these issues.

“We do have issues at home that also need the attention of young people of good will with a desire to help. Drugs, gang crime and unemployment all need a human response from those with an ability to influence others, especially amongst those of the same religious belief.

“I say to young Australians, don’t be fooled by spurious battles between different strains of the same faith happening in so many parts of the world. These are not religious wars but political rivalries in pursuit of geopolitical goals.

“In Syria there are reports of more than 300 people have been killed through Sunni fighting Sunni. It seems ironic that some members of the Islamic State of Iraq and the Levant (ISIL) prefer to fight their fellow Sunnis instead of the Assad regime.

“The world is already far too divided between Christians, Muslims, Jews, Hindus and Buddhists. We don’t need more bloody and divisive clashes. The world needs more unity not less. Taking up arms to further divide the world community is a bad and counter-productive commitment”, Mr Kerkyasharian concluded.

Dr. Stepan Kerkyasharian will his leave his post Friday this week, the 17th of January 2014.He will be continuing in my part-time post of President of the Anti-Discrimination Board of New South.