A force for harmony

As he steps down from his official role, the 'hero of multiculturalism' reflects on the remarkable family story that shaped his outlook. Interview by Leading Journalist Mr.Rick Feneley, News and features writer of the Sydney Morning Herald. 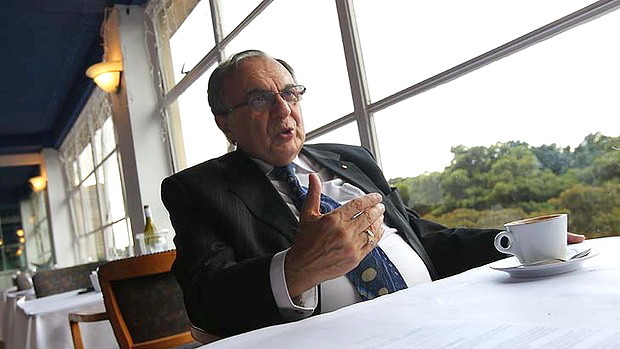 Our window table is a lovely perch with a view over the canopy of Hyde Park's figs. As the autumn sunlight streams in to the Hellenic Club, it catches the sheen of a tear on Stepan Kerkyasharian's cheek. The son of survivors of the Armenian genocide, Kerkyasharian has made a long career in Australia of building racial harmony. He is an optimist. But he also has some terrible stories about the worst of human nature.
He is telling the hardest of them now. It concerns the death of his grandmother. It is his father's account of watching her die.

''My father, Manuel, was nine years old,'' Kerkyasharian says. It was 1916. Manuel and his parents were on a long, forced march out of what today is Turkey. They and hordes of fellow Armenians were rounded up and deported. Along the way they witnessed murder, rape, atrocities.

''My grandmother couldn't go on. She asked her husband to carry her to the river. My grandfather refused. A neighbour carried her on his back and my father accompanied them. His mother knelt and prayed, and then she jumped in the river.'' Years later, Manuel would say: ''I looked and the waters carried her away.''

Kerkyasharian's choice of the Hellenic Club, on the fifth floor in Elizabeth Street, seems the perfect vantage point from which to survey his remarkable life and career. He notes the Anzac memorial in the park across the road. He was raised by his poor refugee parents in Cyprus, where his classmates were Greek, Turkish, Maronite, Armenian and English. Kerkyasharian and our waiter exchange pleasantries in Greek, one of his four languages, as he orders the beef casserole, mosharaki stifado, and requests water rather than wine. I take his recommendation of baked lamb.

Approaching 70 - and after almost 25 years at the helm of NSW's Community Relations Commission and its predecessor, the Ethnic Affairs Commission - Kerkyasharian reveals he will not seek to renew his contract after September. He has outlasted six premiers, from Nick Greiner to Kristina Keneally, and has worked happily with both sides of politics, including with seventh premier Barry O'Farrell, who describes him as a ''hero of multiculturalism''.

Kerkyasharian has played shuttle diplomat between the politicians and Sydney's immigrant communities. He has helped extinguish spotfires of racial tension that at times seemed they would engulf us: following the assassination of Cabramatta MP John Newman; the first Gulf War; the September 11 attacks; riots at Whitlam Park and Arncliffe mosque; the Lakemba police station shooting; the Cronulla riots.

''I've had my share of death threats,'' he says. ''On one occasion I had people sitting outside my house with balaclavas. Once I was followed over the Harbour Bridge. Mostly I think it's people letting off steam.''

Kerkyasharian prefers to measure his commission's success by the long absences of headlines. Foreign diplomats visit it regularly, he says, because they recognise its vital part in the success of Australian multiculturalism, which is the envy of the world. To understand his part in that success, we need to go back to the Cyprus of British colonial rule. Here, young Stepan sewed hemlines to help his dressmaker mother, Zarouhi. He packed shelves in a shop to pay for his fees at the English School.

''There were three aisles in our classes,'' he recalls. ''The Greek kids sat on one side, the Turks on the other, and the Armenians, Maronites, and English sat together in the middle. It was quite clear segregation, a mini-apartheid. Not a single teacher ever said I want to mix these children together.''

Some of those Greek and Turkish classmates, he has been told since, became paramilitaries and then leaders on either side of a bloody conflict. ''Our school was firebombed a couple of times,'' he says.

The Kerkyasharian home in Nicosia was only 30 meters from the barbed-wire division between the Greek and Turkish communities.

At 17, in 1960, he bought a plane ticket and, with £10 to his name, moved to London. It was the year Cyprus gained independence. Under the new constitution, opportunities for Greeks and Turks were entrenched. The chances of an Armenian getting a good public service job were ''zilch''.

Stepan studied electronics. He became a manager at a nightclub. He worked in production engineering for navigation systems. In London, he also met Brenda, an Armenian girl raised in India. But Stepan had plans to move again.

Back in his school days, a student had brought in a brochure from Trans World Airlines. Its cover picture, of a turtle on a white-sand beach, had entranced Stepan. That was where he wanted to live, so he told Brenda: ''I'm going to Australia. I'm going to become successful and rich, and I'll send for you.'' She replied: ''No, if you don't take me now, I won't ever come.'' With her parents' blessing, they married. Stepan was 23, Brenda just 18. It was 1967 and they boarded a boat for Australia. His parents would follow the next year.

Kerkyasharian would never find that beach with the turtle but, in Sydney, he joined the Medical Instruments Company and worked on early designs for electrocardiograms and blood-pressure monitors. He was also making connections with Armenians, who delegated him in 1968 to answer a call to Canberra. Two immigration officials informed Kerkyasharian that his people would no longer need to assimilate. Rather, they could integrate, meaning they could hang on to their culture. ''Assimilation had been an appeasement - it was spin. Of course, it failed. Australians soon said, 'They still look funny. They still talk funny.'''

In the early 1970s, the Whitlam government was to launch a universal healthcare system but realised it could not reach hundreds of thousands of people who spoke no English. It used emergency powers to create radio stations 2EA and 3EA - for ethnic Australia.

''But at this stage, it had nothing to do with multiculturalism,'' Kerkyasharian says. ''No news was allowed, only music and incessant announcements about Medibank and how good it was for you. It was only meant to last a few months but, once they started it, politically it became impossible to shut them down.''

SBS Radio at first broadcast in eight languages, then in another 11, and then in another 26, including Armenian. For three years, from 1976, Kerkyasharian was the volunteer host of a weekly show. He later became Sydney station manager, then SBS's head of radio.

The biggest challenge, he says, was news and bias. Standards could be appalling. Foreign governments pushing propaganda would provide volunteer announcers with free packaged programs. ''There was one broadcaster who'd arrive, go to the boot of his car, bring in the tapes and just let them run. Some of it was offensive; some would create inter-communal conflict.''

By 1988, he and Brenda had three children. But that year, in a case of medical malpractice, Brenda died after a hysterectomy. She was only 39.In the same year, Kerkyasharian became chairman of the Ethnic Affairs Commission.

A Sun-Herald reporter asked him then if he had thought of changing his name, apparently to make it easier for people to pronounce. ''I said I already had changed it. She asked, 'What was it before?' I said it used to be Smith.''

A sense of humour would serve him well in his new role. So would a sense of purpose. That purpose was to engage with communities, to learn their concerns and to act on them. Following the 1994 assassination of Newman, there was widespread anxiety about Asian gangs. Months later, with the support of new premier Bob Carr, ''I went there with my staff. Four of us walked the streets of Cabramatta … we saw people lining up to buy drugs in front of home units. We saw people lying on the street, out of their brains, drugged out.''

He recommended a City Watch program, employed a liaison officer to knock on doors, and ran a forum where tables of 10 residents sat with a police officer and an interpreter. ''We heard their concerns and went through the list, one by one. The broken street light was fixed. The dirty creek was cleaned up. Police would investigate the brothel next door.''

It became a model for connecting with communities. It was the model for dealing with Indian students when they became the victims of violence. ''Racism is not something you can let simmer,'' Kerkyasharian says. ''It doesn't simmer. It explodes.''

On this measure, he says, NSW can be proud as the pioneer of the Community Relations Commission model. It was in the early and mid-2000s - after September 11, Tampa, the Cronulla riots - that he was less impressed with the response from federal politicians, on both sides of the fence. ''We got to the point where political leaders were making statements in support of multiculturalism, then looking over their shoulder in case someone heard them say it.''

He saw it as a reversion to worst instincts. ''Whether we like it or not, racism … is part of human nature. It is the mark of a civilisation to rise above that. And that requires constant political leadership.'' 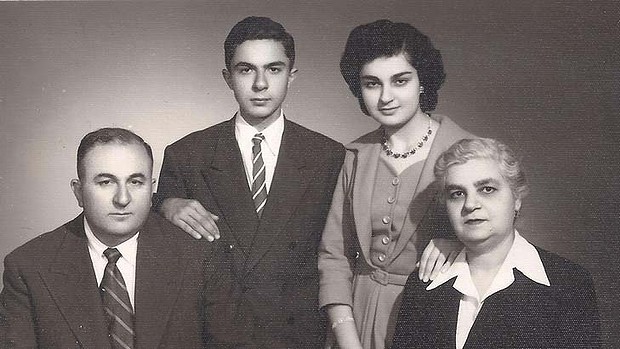 Family: Stepan Kerkyasharian (second left) with his parents and sister in 1959.

It is a point that brings him back to Manuel, his father. In the early 1980s, at his son's urging, Manuel taped his account of the genocide - about eight hours of recordings - on the condition that Stepan not listen to it until after his death. Manuel died in Sydney in 1996, at 91. Since then, his account has become a book, selling six print runs in Turkey.

''That has been possible because my father told this story with no hatred or bitterness. He simply recorded what happened … He always said, 'I should have died when I was nine. This life is a gift from God.'''

Soon after his mother's suicide, Manuel's father also died on the road. Left alone and naked - because children had stolen his clothes - Manuel was approached by some Turkish women. One wanted to kill him but another, ''took the swaddle off [her] baby and wrapped it around me like a skirt''. She took him to her home, washed and dressed him.

''To me,'' says Kerkyasharian, ''that is very instructive. A lot of these enmities, the violence and hatred, are simply generated by the leadership. It is not the people.''

Manuel spent the next nine years hopping from village to village, working here, sheltered there, until he found a people smuggler. Ultimately he landed in Cyprus, reunited at last with one of his four sisters.

Fifteen years ago, Kerkyasharian found ''great happiness'' when he married Hilda, also of Armenian roots. Three years ago, they visited Armenia for the first time. ''Now it is time for me to take it a bit easier, to do some community work.''

And perhaps go searching for that elusive beach with the turtle.