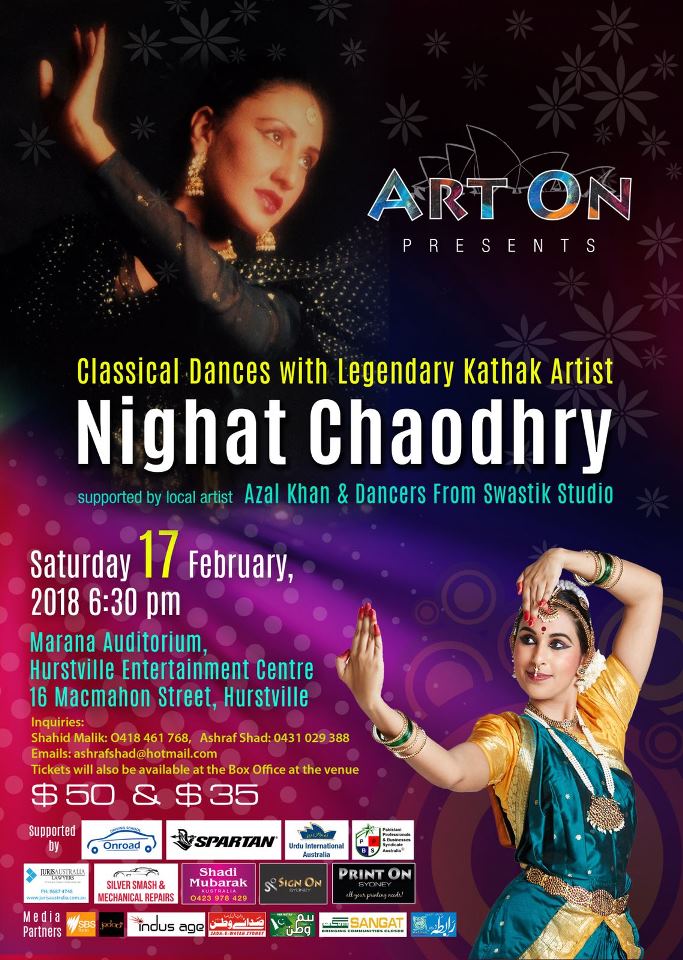 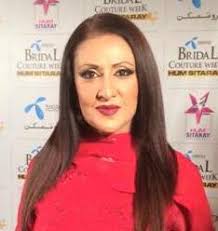 Born in Lahore and brought up in England Nighat has been a dancer from an early age as her skills were vividly visible when she was still a toddler. Later under the tutelage of legendry kathak dancer Naheed Siddque, she got herself groomed to perfection. Besides learning ballet and contemporary dance in London, Nighat also get herself trained in Kathak from the venerated institution of Kathak Kendra in Delhi, from Pandit Durga Lal of the Jaipur gharana. Today she is a force to reckon with, an institution to look forward to. With her newly founded NGO i.e. National Dance Foundations that she aims to preserve the dance heritage of our country.

n 1994, she performed Kathak Solo performance at the FTC auditorium Karachi launching self-choreographed dance work. In 1995, she accompanied Benazir Bhutto (Late Prime–Minister of Pakistan) in a cultural troupe to Turkmenistan, London and the USA projecting a soft and strong cultural image of Pakistan through her lectures, workshops and magnificent dance performances. She choreographed and danced in a ballet on the life of the late Prime Minister Zulfikar Ali Bhutto on his death anniversary in Larkana Pakistan and gained tremendous recognition for her outstanding talent. She performed in all the World Performing Arts Festival in Pakistan hosted by Rafi Peer Theatre. Workshop. It was continued from 1995 till 2013.

In 2003, she performed for Arts Council of Pakistan to Promoting Cultural events for the music Committee Karachi. In 2004, she performed a Kathak Performance at the KODAK-HRD Congress Serena Hotel Islamabad. In 2005, she choreographed and performed in Lux Style Awards and TVOne Global Launch show.

She performed in South Asia Labour Conference at Hazuri Bagh, Lahore, Pakistan. In 2014, she performed in a SUFI KATHAK Musical evening in Multan, organized by the Honorary Consulate General of Paraguay in honour of the Ambassador of the Argentines. She performed in a tribute to the famous poet Faiz Ahmad Faiz Book launch in Sindhi by Government of Sindh, Karachi, Pakistan and performed in 5th Alhamra International Conference (BEETAY HOAY DIN YAAD AATEY HAIN) in Al-hamra Cultural Complex. She also performed in RAQS MEIN HAI SARA JAHAN as "Dancing Away Differences", celebrating International Dance Day at the Art Council, Karachi. She Presented Nuqta a special Sufi Dance performance with live music and poetry on the occasion of the 14th Daniel Pearl World Music Day 2015 in collaboration with kuch khaas and the U.S embassy. She participated as a dance choreographer/trainer in a sixth workshop on capacity building and skills development to strengthen local theatre artists’ capacity to use theatre to promote social change in Southern Punjab, organized by international alerts Pakistan in collaboration with SRAM Studios, Pakistan.

She was noticed for her extraordinary dance talent and was chosen to represent Pakistan in the Asian Advertising Congress in Seoul, South Korea in 1985 and the Great hall of China in 1987. In 1995, she was invited by Citibank and had the honor to perform for the ex-Prime Minister of Great Britain Margaret Thatcher at the Lahore Fort. In 2009, she performed at AGHA KHAN FOUNDATION A collaborative dance performance for the WORLDS OF THE INDIAN OCEAN in Karachi[25] Invited by the Pakistan Embassy to Perform for a charity show in Morocco for the Royal family of Morocco. In 2012, she performed at the WIEF JOHOR BAHRU MALAYSIA 8TH WORLD ISLAMIC ECONOMIC FORUM.

In 2016, she choreographed and performed as Cultural leading ambassador, in the World Cultural Festival among 155 countries at the platform of the ART OF LIVING SRI SRI Ravi Shankar in Delhi India. She has performed to great acclaim in many countries around the world like Japan, China, Sicily, Rome, Singapore, India, England, Austria, France, Germany, Mauritius, and USA. Apart from participating in a number of the International Dance and Theatre Festivals in Pakistan, she has represented the country on platforms like the American Dance Festival in the States, and the Young Dancer’s Festival in India, and many others.

1996 Cricket World Cup was hosted in Pakistan, Nighat Chaodhry was chosen to present a cultural festival in all the major cities, she choreographed for a group of 35 dancers where she acted and danced the character Sassi (A folk legend of Sindh) and the legendary Anarkali in a dance ballet which was also televised for Pakistan Television. She has performed on numerous occasions in Pakistan such as Eid, National Days and Award Ceremonies for PTV and other T.V channels since 1995 to 2010.

Nighat Chaodhry performed raising funds for many charities in Pakistan such as the Cancer Society, Association for Children with Emotional and Learning Problems, SOS Children's Villages and UNICEF. In 1991, she performed for Imran Khan’s cancer hospital, a Kathak Guitar fusion with Salman of Junoon. In 1995, she performed for UNICEF in Islamabad. In 2012, to promote peace and love she also performed with the sufi rock group JUNOON on the platform "UNITED FOR PEACE" a benefit concert for world Peace. In 2013, she also presented a dance to empower women called "STRIKE DANCE RISE" a celebration of women's courage and their determination to live and rise for justice, an e global campaign called One Billion Rising for Justice, in collaboration between Kuch Khaas and the Islamabad-based AMAL Human Development Network.

She performed in the International Mystic Music Sufi Festival in Karachi Rafi Peer Theatre Workshop in 2007. In 2010, Nighat was invited by the ENGENDERED DANCE FESTIVAL New York to present her new dance work on women called Purdah. She performed at the LINCOLN CENTER AND SYMPHONY SPACE.[citation needed] Her performance was reviewed by the ballet review as the most intense dance performance to come out from a country like Pakistan. She performed at the WIEF JOHOR BAHRU MALAYSIA 8TH WORLD ISLAMIC ECONOMIC FORUM in 2012. She performed in the 2ND NATIONAL DANCE FESTIVAL, Lahore Rafi Peer Theatre workshop in 2013.

She performed in a 5-day festival of music, poetry, literature and dance celebrating Hazrat Amir Khusro’s work JAMAL-E-KHUSRO in 2014. In 2016, she choreographed and performed as Cultural leading ambassador, in the World Culture Festival[36] amongst 155 countries at the platform of the ART OF LIVING SRI SRI RAVI SHANKAR in Delhi India.

Acting and On Screen Appearances

In 1992 she started her career as actress; she performed in a video of Pakistan's first "Sufi Rock" Junoon (band), for MTV. She acted in mini-series "Mr. D.J" and "Shee Jee" and in two long plays: "Mystery Theatre" and "Raqeeb". Then she appeared in an interview with TV Asia, London. In 1993, she played a female lead role in PTV drama "Maig Malhar" – a love story of 13 episodes based on the division of Pakistan in 1971.

She also awarded best actress award for this drama serial. Then she acted in "Jaal", Pakistan's first soap opera of 100 episodes, which went on air in Pakistan and on the satellite channel, Zee Tv from London. In 1994, she performed in NTM (Network Television Marketing) Prime Time Show. She choreographed and danced in a fusion of Kathak and Modern Dance to Nusrat Fateh Ali Khan’s song "Mera Piya Ghar Aya". She appeared in an interview with Weekend Masala on NTM. In 1996, she danced in a video based on the achievements of women called "Aurat", choreographed and danced to a concept on communications for NTM Viewers Awards. In 1996, the Cricket World Cup was hosted in Pakistan, Nighat Chaodhry was chosen to present a cultural festival in all the major cities, she choreographed for a group of 35 dancers where she acted and danced the character Sassi (A folk legend of Sindh) and the legendary Anarkali in a dance ballet which was also televised for Pakistan Television.

In 2000, she acted in a long play, "Neeli Dhoop" and a TV serial "Sila". In 2002, she performed in a music video for Sufi Group Junoon. Poetry by Pakistan's renowned poet and philosopher "ALLAMA IQBAL", she acted in a serial called “MA” shot in Scotland. In 2003, she acted in a Pakistani feature film, directed by Ajab Gul called "kyon tum se itna pyar hai".