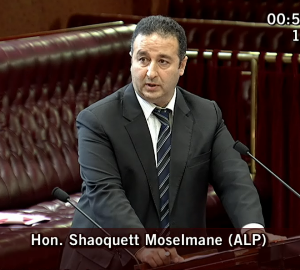 The Hon. SHAOQUETT MOSELMANE [11.20 a.m.]: I speak on this very important motion. First of all I express my sympathies to the Cheng family. The sad loss of an innocent life taken by a 15-year-old child was a shocking act condemned by all decent-thinking human beings. I take this opportunity to also express my sincerest condolences to the families of all those whose innocent lives were taken by a heinous act of terror carried out by ISIS in the French capital. The terror attacks which targeted the Bataclan concert venue and the Stade de France football stadium, along with cafes and restaurants, left 131 people dead and many more injured.

Similar horrors were executed in other countries around the globe: Turkey, Kuwait, Lebanon, Syria, Egypt, Libya, Yemen, Saudi Arabia, Bahrain, Nigeria, Kenya, many of the African States, China, and many others we do not hear of—attacks committed by ISIS, al-Nusra and the many sister terrorist groups in Syria and in Iraq—al-Qaeda, Boko Haram and many others too numerous to mention. They should all be condemned. No-one should play to their tunes for foreign policy interests. I offer condolences to the Russians and the families of the 240 innocent victims holidaying at Sharm el-Sheikh in Egypt and to those of Christian faith and other people of faith in the Middle East, including the Palestinian people, who have suffered 70 years of oppression.

Terrorism has not, does not and will not discriminate between Muslim and non-Muslim, between Arab and non-Arab, between poor and rich or between young and old. It has impacted on Muslims of all colours, Christians of all denominations, Yazidis, Kurds, Copts and any other minority that exists in the Middle East. Unfortunately, the picture we get in Australia of what is happening in the Middle East is a distorted keyhole view of the world as dictated by those in power and narrated by those entrusted with producing the agenda.

Those in positions of dominance construct knowledge and manufacture truths, stereotyping and categorising people. Manufacturing assumptions about violence due to Muslims as innate barbarism and tribalism is wrong and should not be perpetuated. Such representations become language, institutionalised and normalised, reproducing a narrative about the other, in this case the Muslims, as barbaric. That is how certain structures of knowledge become the dominant norm and that is why in Australia and around the world Muslims are depicted as a security threat, a threat to public safety, a cultural threat or an economic threat.

This skewed view of Islam legitimises public hate campaigns and thus lays the ground for further vilification and hatred of Muslims in Australia. It legitimises the nasty, trashy, vitriolic, hate-based attacks that we often witness in public and sometimes here in this House. The Islamic community, like any other community, is made up of people who go on with their daily lives like any other citizen. They work, they earn a living, they raise their kids and they contribute to the overall good of society. They have no more power or authority over criminals—in this instance, terrorists—than any other citizen. They do not sit in the wee hours of the night plotting the destruction of the State.

Therefore people should not blame the Islamic community for what is currently unfolding. Muslim Australians deplore ISIS, condemn their attacks and are angry that they commit such horrific acts of violence in the name of Islam.

We have faith in the Australian Federal Police Specialist Response Group, the Australian Federal Police Protective Service, the Australian Customs and Border Protection Service, the Royal Australian Corps of Military Police and the Australian Security Intelligence Organisation. The Counter Terrorism and Special Tactics Command is responsible for the NSW Police Force's preparedness for, prevention of and response to the threat of terrorism in New South Wales. There is also the Coordinated Response Group, the Anti-Terrorism and Security Group, the Operations Group, the State Protection Group and other groups within New South Wales police including the Middle East crime squad and many others. We have many security institutions and agencies that can keep us safe. Having said that, I believe everyone has a role to play—and that means everyone.

Finally I take this opportunity to raise a very important issue for all to note. The State Government will reportedly overhaul hate speech laws. Attorney General Upton says, "The laws just don't work." And I agree. The Attorney is right. They do not work, particularly for the Muslim community in Australia.

One of the reasons is that neither the New South Wales anti-discrimination law nor the Commonwealth racial vilification laws provide the Muslim community with necessary protections. It is time we fixed that. This is why in New South Wales we must immediately stop such attacks on this community and we must amend the New South Wales Anti-Discrimination Act 1977 to include religion as a ground of discrimination. With the exception of one or two States, all other State and Territory laws have religion, religious activity, belief, affiliation or religious conviction as a ground for unlawful discrimination. The Government needs to address this deficiency and ensure the Anti-Discrimination Act 1977 provides proper protection to all religions, including Islam.

This Act ought to be looked at. In Victoria, for example, religious vilification is treated in similar terms to racism. The Human Rights Commission's recent report finds that Muslims have "limited protection" under the Racial Discrimination Act. This report has found that Muslim Australians are facing persistent abuse and discrimination. That ought to be addressed. Once again I congratulate the mover of the motion, the Hon. John Ajaka, and the Government on this motion. I mourn all the innocent lives lost and I condemn all responsible for the loss of innocent life. I commend the motion to the house.