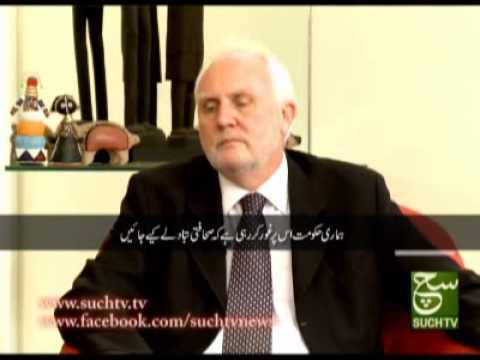 Sach TV is the true picture of Pakistani and Muslim media. Based on the new media and unique journalism format, Saach.tv has the capability Broadcast Live News, Family Entertainment, Breaking news, live events. Anyone can Watch Such TV Online. Such TV’s weekly program “Ambassador speaks with Aftab Raza” is very popular. In this program they are presenting every week exclusive Interview of any Important Country’s Ambassadors.

Last week Such TV telecast Interview of the Australian High Commissioner to Pakistan His Excellency Peter Heyward. During the Interview, the Australian High Commissioner to Pakistan Peter Heyward said that the general elections in Pakistan were held in a free‚ fair and transparent manner. In an interview he expressed his hope that the newly elected Pakistan Muslim League-Nawaz (PML-N) government would work diligently to overcome key challenges like energy crisis and terrorism.