“Those who are silent while others are oppressed are guilty of oppression themselves.”
— Imam Hussain (a.s.) 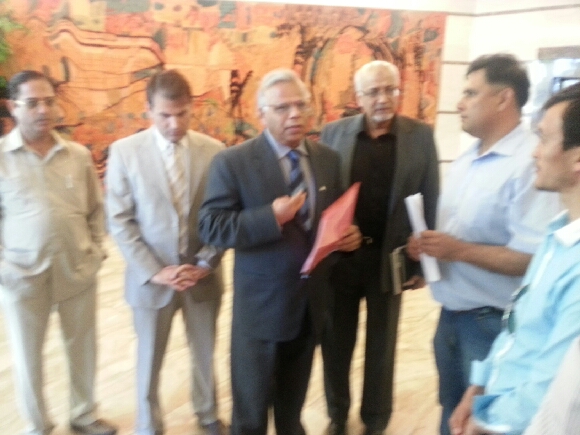 On the call of all Shia centres, on Monday, 14th January 2013, over 400 persons staged a peaceful protest in front of the Pakistan Consulate to condemn the killings of Hazaras in Quetta and the failure of Baluchistan government to provide security to the Hazara people on the 10th January genocide. The protesters included the Hazara Community and representatives of many religious organisations. The disciplined and peaceful protest was also participated in by women as well as young children.

They strongly condemned the targeted killings of Hazara and Shias by terrorists in Pakistan and demanded removal of Baluchistan Government as it failed to protect the lives of innocents Hazaras. The leaders informed of the great contributions made by Hazara people to Pakistan and said they are as patriotic as any other segment of the Pakistani communities but it is a crime that genocide is being carried against them and the government could not bring the culprits to punishment. 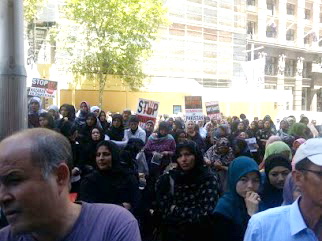 They asked why Hazaras and Shias are targeted by these terrorists? Do we not have right to live in peace? Why we are discriminated because we are different? Are we not Pakistanis? Are we not Muslims? What crime we have done? If any crime has been done, it is by the Baluchistan Government which has not been able to provide security.
They demanded that the perpetrators should be arrested and awarded exemplary punishments. They also expressed their solidarity with the innocent people being targeted in terrorist attacks in other parts of the country.
They demanded immediate removal of the government and better protection by army and security personals. They also demanded to have better protection and living conditions for the 600000 peace loving but unfortunately oppressed Hazara Community.

A resolution was passed condemning these brutalities and it was demanded that this be conveyed to the Pakistani Government through the Consulate General. Police was requested to allow 2-3 representatives to visit Consulate to hand over the resolution. The Consulate offered to receive it from us in front of all the protestors. The Consul General came to the protest and conveyed his and all the Consulate members’ grief and condolences. He said the whole nation is in grief due to the tragedy and prayed for the departed souls of the Shaheed. He said he is very much part of the protest as he and his Consulate colleagues feel the same grief for the departed innocent souls. 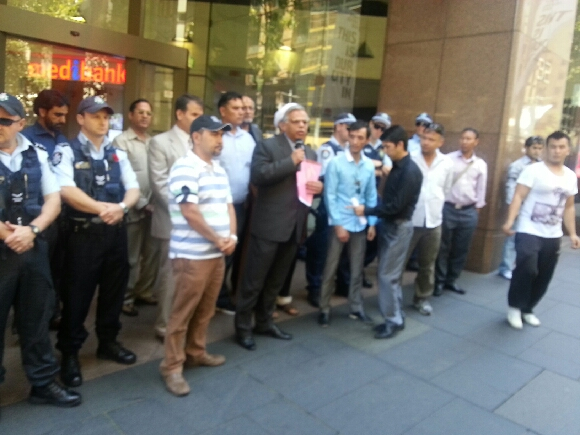 Consul General of Pakistan Speaking to the protesters

In his speech, the Consul General Azam Mohammed strongly condemned the terrorist and said these people can not be Muslims who kill other Muslims.He said we must not fall in their trap and design to divide us as we are all Pakistanis and Muslims. In this time of trial, we must stand united and condemn the terrorists and their barbarism. He said grief and solidarity is being observed in all cities of Pakistan. 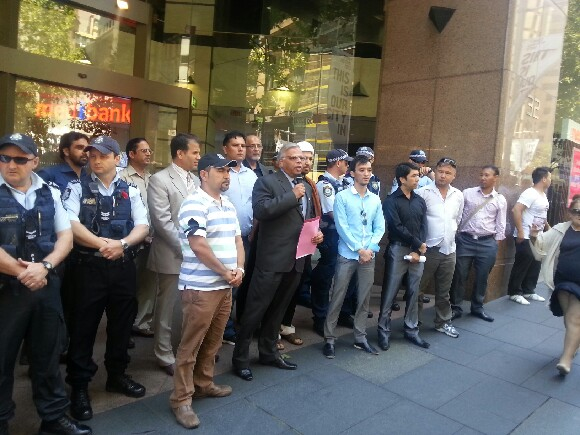 He assured them that the government was fully aware of the gravity of the situation and was taking all measures to bring the culprits to justice. The Consul General also briefed them about the latest developments like visit of the Prime Minister to Quetta to express solidarity with the Hazara community and the imposition of Governor Rule in the province and delegation of police powers to FC. 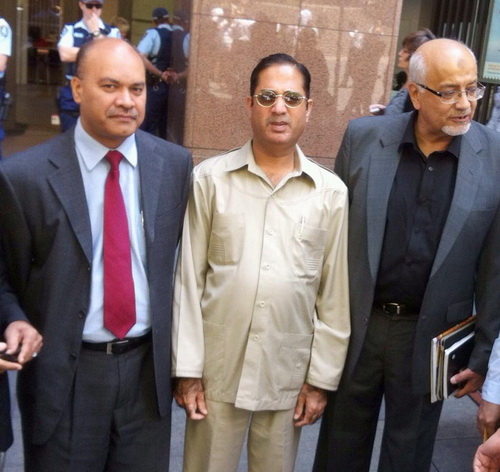 The sentiment and presence of the Consul General was appreciated by the speakers who thanked him for joining them and for expressing sympathies and solidarity with the bereaved families. Finally Dua was offered for the victims and their families. 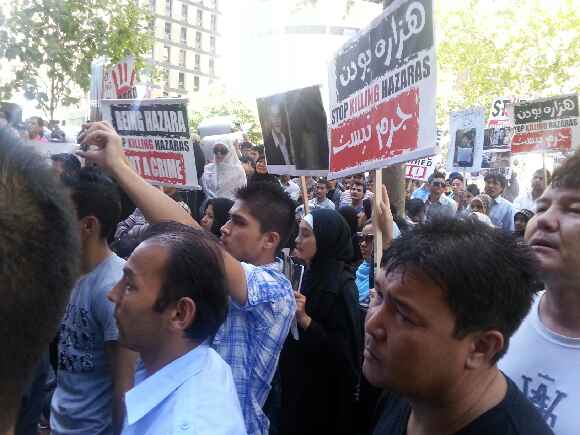 A peaceful protest against Shia genocide was conducted outside the Pakistani consulate office in Martin Place, Sydney on Monday 14th January 2013. Gatherers assembled at 11am and the crowd grew as the day went on.

The protest followed events in Pakistan where 87 Shia’s were martyred in Quetta. Sectarian violence has been a big problem for the people of Pakistan where Shia Muslims make up approximately 20% of the nation’s population. Attacks and bomb blasts have been the result of targeted violence with the citizens of Baluchistan angered by the lack of protection offered by the local authorities. A 3-day protest was staged next to the deceased bodies at the bombing site in freezing temperatures as low as -6 degrees Celsius. The protesters demanded that local civilian government members be sacked for their incompetence in providing security to locals. Calls were made for a declaration of Governor-rule with the army to take control of the province as they could provide more security for those suffering from such violence. Sectarian violence has been a prominent issue in Pakistan for the past few years. 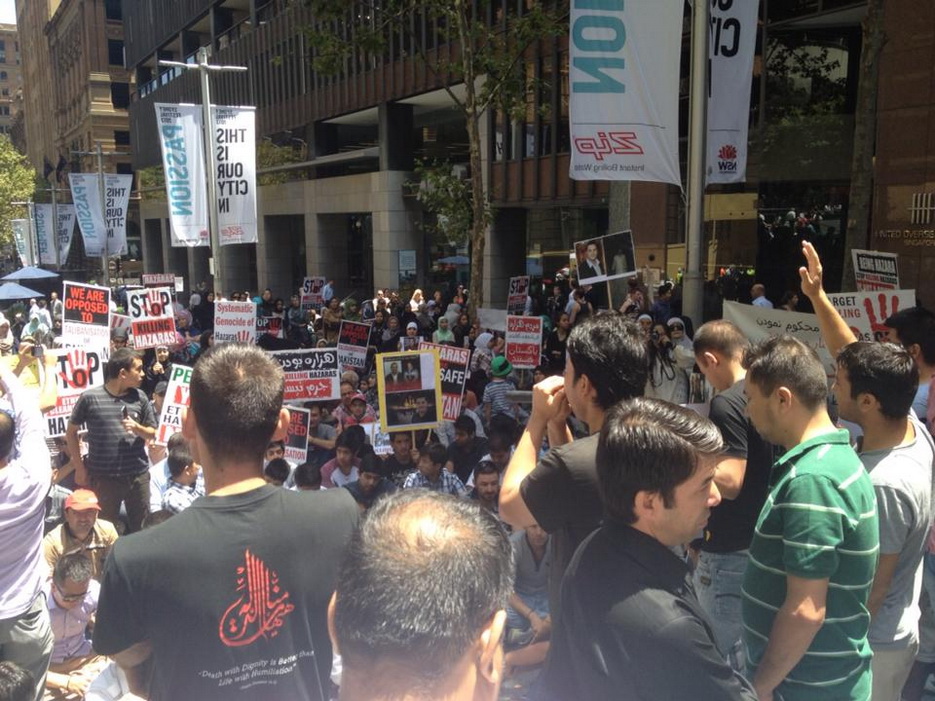 Henceforth, after the tragic events that occurred in Quetta, a protest was called in Sydney outside the Pakistani consulate. Local community organisations such as Panjtan Welfare Sydney, Imam Hasan Centre and Muhammadi Welfare Association supported the cause. The Sydney protest was addressed by the Pakistani consul general Mr. Azam Mohammed who condemned the attacks in Pakistan. He assured the protesters that the Pakistani government would take immediate action. Protesters in attendance were relieved by his words and thankful for his acknowledgement of the feelings of local Sydney community members.

Ongoing violence in Pakistan has had an impact on many overseas Pakistanis who have lost relatives and friends to the attacks. Many of those in attendance had posters and signs with slogans such as ‘Peace- YES, Ethnic Hatred- NO’ and ‘Hazaras not safe in Pakistan.’ The protest continued throughout the day and was not just against the targeted killings in Quetta, the subject of the protest also extended to attacks in Para Chinar, Mastung, Gilgit, Karachi and against all Shia genocide in Pakistan. 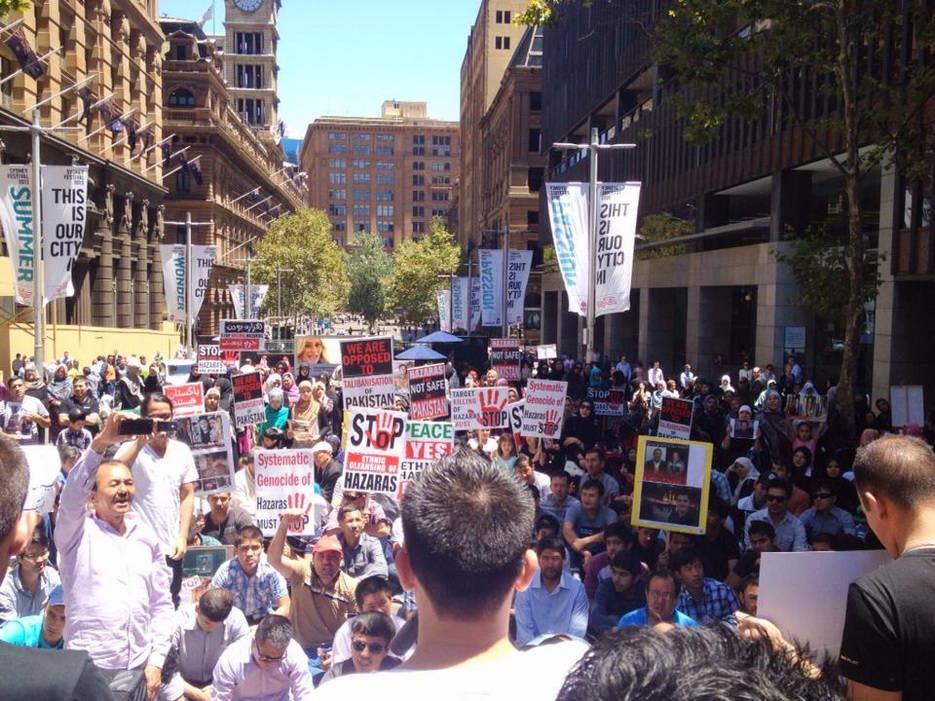