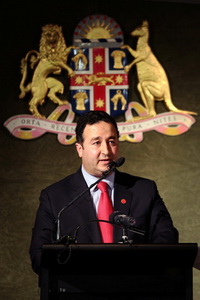 Hon.Shaoquett Moselmane’s Speech of Friday,22 Feb 2013 on The Aboriginal Recognition in the Constitution

ABORIGINAL RECOGNITION IN THE CONSTITUTION

The Hon. SHAOQUETT MOSELMANE [3.51 p.m.]: This month marked the birth of Islam's most revered human being, Prophet Mohammed. May peace be upon him. It is a momentous occasion that is celebrated by more than 1.5 billion Muslims worldwide. I had the pleasure of attending the celebration held by the United Islamic Association of Australia, where I addressed a gathering of new Australians, predominantly of Fijian Indian and subcontinent background. I began my speech with the usual greetings and acknowledgments. A look of curiosity appeared on faces of those in the audience as I acknowledged the rightful owners of the land: the Aboriginal people and their elders past and present. I paused and added that we ought to always acknowledge the original owners of this land who have cherished it for over 50,000 years. The look of interest on people's faces turned into amazement as I spoke of the current debate on constitutional recognition of the rightful owners of the land. The people were amazed to hear that our advanced nation, which prides itself on the principles of democracy, liberty, fraternity and human rights, does not recognise the rightful owners of this land in its Constitution.

This amazement turned into astonishment when I noted that it was only in 1967 when Australia's Aboriginal people were included in the national census and given the right to vote. It was not as if the ballot boxes were swamped with swags of Aboriginal votes that redrew the national political map. As of 30 June 2006, it was estimated that the Indigenous resident population of Australia was 517,200, or 2.5 per cent of the total population. This was hardly a figure that would provide a single quota to elect one Aboriginal person to our national Parliament. Constitutional recognition of Aboriginal Australians is now real and meaningful and no longer seen as a symbolic gesture. Noel Pearson stated:

This is much more than a question of symbolism, this is a question of national wellbeing and national identity. It's about coming to terms with who we are as a nation and deciding who we want to be in future.

With everyone's support, I feel once again a glimpse of hope for Aboriginal Australians. In hope, I share the views of our national leader, Ms Julia Gillard. She stated:

Constitutional reform will make us a better nation-more at peace with our past, and more confident and united as we face the future together.

For once I concur with the Federal Opposition Leader, Mr Tony Abbott, when he stated:

I also agree with the views expressed by The Greens leader, Ms Christine Milne, when she stated:

What a great thing for Australia it would be if, at last, we recognised Australia's first people in our Constitution.

I also agree with Barnaby Joyce, the Nationals leader in the Senate when he stated:

I think we have a duty to do the right thing. So I'm encouraging you, as a person you know is pretty conservative, to move yourself to the position where we move this nation forward as one.

I hope at the next referendum our Aboriginal brothers and sisters are embraced and the nation is united in support of proper constitutional recognition of the original owners of the land. I hope we are genuine in taking this opportunity to work together to better treat and respect those who have cared for and lived on this land that we all love and cherish. I congratulate the Federal Parliament and hope that we can stand tall and united for a better future. In the words of Patrick Dodson, the father of reconciliation:

Recognition of the first people in the Constitution of a country starts to send a message that you are valued, you are important, that we want to respect you, and we want to deal with the things that have caused us division and discord in the past. I thank the House.